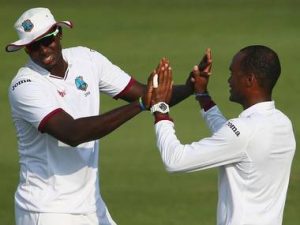 “The big boys will be back,” he says

West Indies heroes from the Bangladesh encounter have touched down in Antigua for the upcoming all-format Sri Lanka series. Will Lead Selector Roger Harper and his selection panel have a headache to select the West Indies teams for those matches against Sri Lanka, asked Brandon Corlette of Guyana Times as Sri Lanka toured the Caribbean island yesterday (23).

According to Harper, there is “no headache” in terms of selection. “I don’t expect us to have headaches. I think you only have headaches when you don’t have choices and when you can’t find players,” Harper disclosed on the recent Mason and Guest Radio programme.

Sri Lanka will commence their campaign against the West Indies on 3 March in Antigua, and all the Windies players are available. Lead Selector Roger Harper has said recent and past performances would influence selection of the West Indies T20, ODI, and Test teams.

“Well, I think (that) when we sit down to pick the teams, we will be looking at performances. And all performances and, you know, performances in the distant past and in the recent past and over the last few series as well. So, based on those performances, we have our choices to make,” Harper said.

Regular Test Captain Jason Holder, having recently been placed in the fire by former cricket legends for his “poor leadership” while Kraigg Brathwaite having displayed outstanding leadership qualities, reigning supreme in Bangladesh, many are calling for Brathwaite to lead the Test team against Sri Lanka.

When the West Indies were getting ready to depart for that memorable tour to Bangladesh, most of the first-choice players had declared themselves unavailable, citing Covid-19 concerns. Although labelled as a second-string team by many, the Brathwaite-led team surprised the world by pulling off a 2-0 Test series win against Bangladesh in their own backyard.

The West Indies T20 team is expected to be finalised and announced shortly, followed by the ODI and Test teams.

February 23, 2021 byRevatha No Comments
The WI - SL time difference and SL's recent poor form may lead to the blac-out