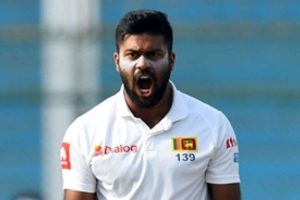 Sri Lanka’s fast bowler in the ongoing first Test against Bangladesh now on in Pallekele, Lahiru Kumara, is likely not to play further part in the match due to a hamstring strain.

Kumara is also likely to miss the second Test too that starts on 29 May at the same venue.

Bangladesh were strongly placed at 515/6 in their first innings in the morning session of play on Friday (23), the third day of the first Test.