October 31, 2021 by Dimithri Wijesinghe No Comments

This week, Brunch spoke to a visionary filmmaker making waves in the international industry. 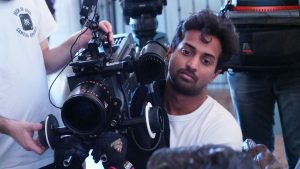 Los Angeles-based Sri Lankan filmmaker Lakpathy Wijesekara premiered his latest directorial venture “Free By Noon” at the Laemmle Theatre in Glendale, California. Having screened from 15-21 October in Glendale, there are plans in the works to screen the film in New York, Texas, Atlanta, and maybe even Sri Lanka.

Starring John Eisen, Raechel Wong, Justine Herron, and Melissa Howell, Free By Noon is a comedy about a married man who tries to have some “extra” fun in Las Vegas, where he gets locked up in a very unusual situation. He has to get himself out of this sticky situation to save his marriage before his wife gets home. 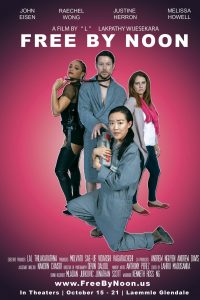 We spoke to the young and passionate filmmaker about his journey as he traversed the American film industry as a Sri Lankan in a foreign land and in an industry that is notoriously difficult to break into and famously rife with racism, particularly to those of darker skin tones and “ethnic” names.

Prior to his move to America, Lakpathy was a student of Royal College, Colombo, which is where he experienced his first foray into filmmaking. Speaking about his childhood, Lakpathy shared that, unlike his academically gifted brother, he was more inclined towards the arts, choosing to focus his energy on creative pursuits like photography and video production rather than on maths or science.

Most kids who grew up in the 90s and early 2000s would recall the popular children’s show “Sellam Gedara”, and Lakpathy said that when he got the opportunity to take part in that show was when he had his first exposure to what it looked and felt like to be on a television production set. “That is where I fell in love with the craft. I think I found my place in film,” he said. 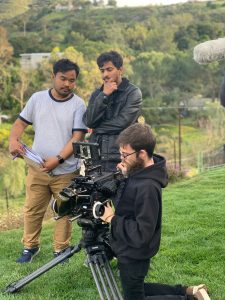 Riding this wave of newfound enthusiasm, Lakpathy and a few friends went on to become their school’s very own video production crew of sorts, as they would take on numerous projects within the school and eventually expand to other schools as well. “We would cover a lot of the social events like various theme days, and these projects gave us a lot of creative freedom because it was entirely up to us how we went about capturing each event,” said Lakpathy, adding that these independent efforts paved the way for the Le Royale YouTube channel.

Well before everyone, his uncle had a YouTube channel, and during his Ordinary Level (O/L) days, Lakpathy was possibly one of the first in Sri Lanka to curate a YouTube channel where they would showcase their projects online. “I got into so much trouble because of this channel. I even came close to getting kicked out of school several times, with some parents making complaints asking why their daughters were on the internet,” said Lakpathy, who appeared to have taken it all in his stride, all of which tacked on as valuable experience when he eventually decided to pursue filmmaking in his higher education.

On moving to America in 2011 to study filmmaking, he said: “I knew I had to come here and get a feel for it; I had to learn and get an idea of what it is like.” He shared that the initial experience he had on the field was invaluable, as the first years in film school were pretty much what they had been doing for years in Sri Lanka, covering events, editing, and production. 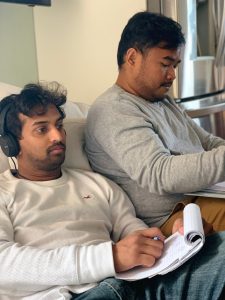 Finally graduating from UCLA (University of California, Los Angeles), it was time to start working on a real-life film set, and Lakpathy said that things really weren’t easy. As an aspiring filmmaker, he wanted to work in production companies, to be able to be on the ground in film sets, but an opportunity almost felt impossible to come by.

“It was heartbreaking really. I tried very hard to get work in a studio, and I didn’t hear back from anyone,” he said, adding that this slowly started to sow the seeds of doubt when he started to question: Am I not good enough? Is my work really bad? However, he came to the realisation that if he were to change his name on his applications to typically western-sounding names, he would immediately hear back from these places. This really opened his eyes to the true nature of the industry and how he had to fight an uphill battle.

Regardless, things kept moving forward and he did share that things are a lot better now; even though Los Angeles is a melting pot of diverse cultures, there is a certain level of stereotyping, with one of the biggest challenges he faces on the regular being creating the distinction between Bollywood and himself. “The stereotyping is still there, if there is a casting call for a tech guy, or a doctor, or a gas station worker, then you will see all the South Asian actors in the city gather to audition,” he said. 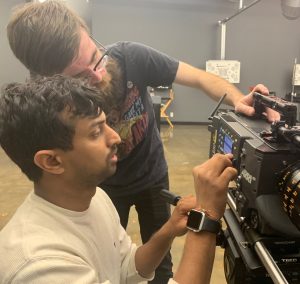 When it came to his professional career as a filmmaker taking off, Lakpathy shared that he chose to start his own production company. Down the line, having filed for bankruptcy once, and then starting everything from scratch once again, here he is with “Free By Noon” under his brand new production company, having had two sold out nights at the Laemmle Glendale. “We are planning on having a late screening for people who missed the film on its first run,” said Lakpathy. This is a testament to how the film has been received by audiences.

With Free By Noon being what one would essentially call a “dramedy”, Lakpathy shared that his films tend not to fall into one single category, often ending up an amalgamation of multiple emotions in his effort to tell an authentic, raw, and relatable narrative. His films are representative of the diversity in America. However, he shared that despite his film’s diversity and inclusivity, he’d rather not insert his Lankan identity in his narratives, and would rather make films that people can enjoy beyond cultural boundaries.

With the success of Free By Noon, we can certainly expect a lot more to come from Lakpathy, and he too shared that there is a project in the works right now, although he is currently in the middle of convincing interested parties to not alter a story about a Sri Lankan to be about an Indian simply because it will reach a wider audience. But these are the obstacles one must overcome in an industry such as this, he said, adding that he has made peace with it and is determined to keep going.

Running away from your traditional family

February 7, 2021 byNews Admin No Comments
If you ask young Sri Lankans when they leave the country about their reason for leaving, on top of the usual “better education”, “better job prospects”, and “better salaries”, you also hear..

A different kind of tune: Flowers on Both Ears

May 11, 2020 byJennifer Anandanayagam No Comments
“Flowers on Both Ears” is the new kid on the block, comprising Shafni and Isaac who have so far been performing individually around Colombo for several years now. Their work is a contrast to the munda

Daylight robberies on the rise

PMB to purchase ‘Yala’ paddy from this week

India-SL ‘two sides of a coin’ with ‘symbiotic relationship’