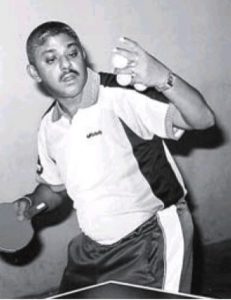 The first table tennis (TT) player to win three consecutive Sri Lanka national titles, from 1988-90, Lalith Priyantha, one of the giants in the sport of TT in the island, is now on a new mission: TT coaching only for the ladies.
“It (the new programme) will have a number of benefits for those who play TT as a leisure activity and exercise, as well as a competitive sport,” said Priyantha, former Sri Lanka player, Captain, Coach, selector, and President of the Sri Lanka National TT Association.

“Women are usually reluctant to continue the sport after their age of about 20. That is not a good tendency. TT is not a costly sport nor does it take a large space. Any person with simple hand-eye coordination can play it,” he says.

“This game will enable ladies to have exercise, relaxation, and eradicate depression and dementia at the older age.”

Priyantha, the current veterans’ national champion, coached Sri Lanka team for the TT World Championship in 2010 and 2015, in Russia and China respectively. 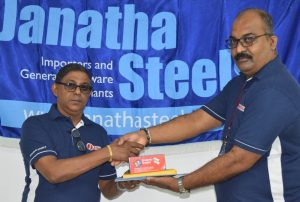 Lalith Priyantha receives sponsorship for the new ‘ladies only’ TT coaching programme from Janatha Steels, which is represented by its General Manager G.A.P. Roshan (on right), in Colombo on 29 October

“In the ‘post pandemic’ society, this indoor sport will be a handy pastime for the busy professional women, the housewives, as well as those who aspire to play it more seriously as a competitive sport,” opines Priyantha.

“Janatha Steels Company joins us in this new endeavour. I’m willing to share my over 30 years of experience in TT,” adds Priyantha who is currently Coach of S. Thomas’ College, Mount Lavinia and Methodist College, Colombo.

April 8, 2021 byRevatha No Comments
The positive impact created by the “1991 SAG” in SL sports was felt much longer after that

November 10, 2021 byRevatha No Comments
The batting maestro said the Thomians lacked the basics, and then the floods opened!