Land clearing for cultivation, not in protected areas

The Minister of Environment affirmed that none of the recent land clearances that were reported took place within forest reserve land areas or Department of Wildlife Conservation (DWC) lands. 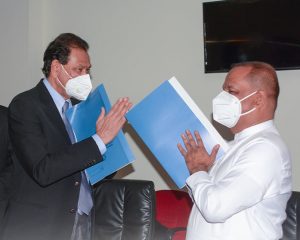 Minister of Environment Mahinda Amaraweera, speaking to The Morning, said: “Although there is an increase in incidents being reported stating that private plantation companies are encroaching forest lands, the committee that is appointed to look into these matters have found during their preliminary observations that these lands are within the Mahaweli zones which were originally zoned for cultivation purposes. These lands have been underutilised for years, and with the revival in agriculture, many of these lands are now being put into good use.”

Amaraweera confirmed that no land which belongs to the Forest Department or the DWC has been affected by such plantations, except for the incident that was reported in Anawilundawa when the Ramsar-protected wetland was cleared.

He also noted that private plantation owners are now joining the Ministry of Environment’s project to reforest areas which are identified as watersheds and water catchments areas.

“Recently, the Bogawantalawa Plantation Company signed an agreement with the Ministry to plant trees in a 250-acre land expanse in the Hill Country. The main objective of this partnership is to prevent soil erosion by planting trees in the upper catchment areas of five waterfalls and to increase the forest cover of our country,” Amaraweera elaborated.

The programme commenced yesterday (17) under the “Husma Dena Thuru” tree planting programme implemented by the Ministry of Environment in the upper catchments area of the Castlereagh Reservoir in Hatton.

The Minister further stated that private institutions and companies are making a significant contribution to the steps taken by the Ministry to involve the private sector in environmental conservation programmes in the country without spending government money.

Suspect arrested for abusing schoolgirls through the internet

July 8, 2021 byMihi Perera No Comments
The Matara Divisional Children and Women's Bureau has arrested a man for allegedly abusing several schoolgirls through the internet.

Renewal fees of five types of excise licenses waived for 2021

January 6, 2021 byMihi Perera No Comments
The Excise Commissioner has sent a letter to District Secretariats informing them not to charge renewal charges for the renewal of five types of excise licenses in the year 2021.