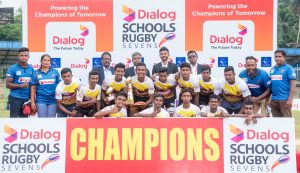 After the country was deprived of rugby action for more than 600 days!

From the busy city of Colombo, to the beautiful hill country, and to finish off in the southern coast of the island, school rugby in Sri Lanka returned as a late Christmas gift for the country’s passionate rugby fraternity.

The country was deprived of rugby action for more than 600 days through two years, but was finally treated with six days of exhilarating schools rugby, spread across the festive season.

‘The Bamba Brigade’ earn bragging rights of the capitol

In Segment ‘A’, St. Peter’s College, Bambalapitiya clinched the Cup Championship beating S. Thomas’ College in a close finale. The tournament had a few surprises with D.S. Senanayake College, Colombo beating both Isipathana and St. Joseph’s Colleges on their way to the Cup semi-finals. ‘The Dons’ took home the Plate championship beating Royal College, Colombo in the final. Mahith Perera of S. Thomas’s became the Player of the Tournament.

The two best teams were up against each other for the Cup title. It was the Three Lions who came on top in the final.

Kingswood, who looked a strong outfit, couldn’t handle the pressure of the final as Trinity rolled over the boys from Randle Hills. Ravidu Wickramasinghe of Trinity was awarded the Player of the Tournament for his heroics in the tournament.

Maliyadeva – class above the rest

Maliyadeva College won all three of their league matches to become Cup champions of the North Western Province.

The tournament was initially supposed to be played with seven teams. Due to few Covid-19 positive cases in two teams and having underage players in the squad, three teams withdrew.

The four teams played in a league format as Maliyadeva dominated the three games and clinched the Cup title. The hosts started off thrashing Kuliyapitiya Central 59-0.

In the second game, they beat Welagedara Central 42-0. The final was played against Ibbagamuwa Central, who came into the game unbeaten. It was a virtual Cup final which Maliyadewa won handsomely. Shenal Thennakoon of Maliyadeva was awarded the Player of the Tournament title.

Thalduwa have the biggest surprise win

In the Cup semi-finals, they came from behind to score two tries and beat Eheliyagoda. The finale was a piece of cake for them against Kegalu. Dasun Meewala of Thalduwa was adjudged the player of the tournament.

Richmond proved to be the far better side out of the seven teams that participated in the tournament. Richmond’s Thilosh Mendis was awarded Player of Tournament.