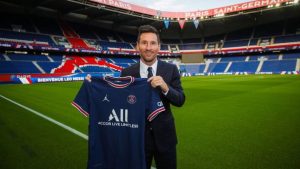 Mauro Icardi, Kylian Mbappe, Julian Draxler, and Pablo Sarabia scored for Paris-Saint Germain (PSG) in their second match of the season against Strasbourg.

They missed out on the league title last season, but with the new signings PSG are looking a much stronger outfit. Lionel Messi cheered from the stands as he waited for his debut for the Paris team.

The much awaited English Premier League kicked off last weekend. Arsenal visited the newly promoted Brentford and they were stunned by 2-0 defeat.

Manchester United announced they are the newest recruit Rafael Varane before their tie against Leeds which they won 5-1.

Liverpool and Chelsea also won their respective games but it was City who took the headlines after their 1-0 defeat to Tottenham Hotspur in London.

Spurs talisman Harry Kane was absent for the match as the Spurs fans sang “are you watching Harry Kane?” The striker is fancied for a record transfer to City, with Pep Guardiola’s eyes set grab him this transfer window.

Quote from a Legend

May 28, 2021 byRevatha No Comments
A saying by a renowned sports legend