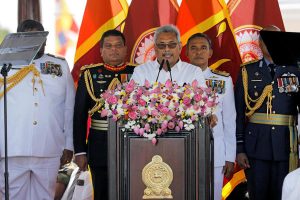 President Gotabaya Rajapaksa, delivering his maiden Independence Day speech, said all the right things the country needed to hear; so much so that even prominent Opposition members of Parliament took to Twitter to offer their praise and appreciation.

However, as one Opposition politico put it, words alone no longer matter and everything the President said must be matched with actual delivery during his tenure, probably recalling that presidents past have said even nicer things.

For 72 years, an assortment of heads of state representing the two main parties have promised various things at different times – even rice from the moon – but very little of those promises have actually materialised. It could be safely assumed that even if 10% of those promises were kept, Sri Lanka would today be the Singapore of South Asia. Given this dubious record, the scepticism is palpable as much as it is inevitable.

However, for some reason, President Rajapaksa’s words seem to have struck a chord. We do not recall any instance in the past where outspoken critics have applauded a president so soon after taking office. Although Rajapaksa’s bona fides will become clearer only after the April election, one cannot help but get the feeling that he is genuinely attempting to transform this corrupt, lethargic, underperforming nation to exploit its full potential by laying the foundation for effective governance.

One trait the great majority of our people have consistently displayed is the habit to blindly follow their political masters; probably a colonial hangover ingrained over 400 years of foreign domination which unfortunately our politicians have cunningly mastered to suit themselves. But this is where Gotabaya Rajapaksa is different.

For the most part, he has acted statesman-like as the presidency demands and not resorted to score cheap political points by blaming his opponents for every failure – a temptation all of his predecessors have failed to resist.

Rajapaksa’s unique selling point is that he is not a politician. Instead, he is proud of the fact that he is a retired serviceman. This is why he chose to wear his military honours on the now trademark white shirt at the Independence Day ceremony even though he dumped the full suit usually worn by retired armed service personnel. Through this simple act, he conveyed a subtle yet powerful message that security is in good hands and that he intends to get the job done with military style speed and efficiency. If some in his own camp don’t pull him by the legs, indications are that he is willing to go the extra mile to get Sri Lanka out of its self-created rut.

Next week, President Rajapaksa will complete three months in office. His style has been in marked contrast to his predecessors’ who have been focused more on building their personal image than that of the country. For the most part, he has shied away from the limelight, preferring not to waste time attending useless political events demonising the Opposition and sermonising how things should be done, preferring to get down to actual work and lead by example. And his strategy seems to be working, at least in getting the public service activated.

State institutions are beginning to show efficiency levels not seen in recent times, especially those he has visited unannounced. Others seem mortally afraid of an impending presidential visit and attendance, especially in the executive grades, is said to have significantly improved. In addition, service delivery has improved because when the higher-ups do their job, the rest follow.

Meanwhile, the story with the self-appointed Opposition continues to go from sad to sadder if not from dumb to dumber. Rather than sync with the changing times and recalibrate their strategy to portray a more efficient future administration, for all intents and purposes, the Opposition seems to have simply lost the plot and folded.

Both the United National Party (UNP) and the third alternative, the Janatha Vimukthi Peramuna (JVP), seem to be in the same boat; still unable to stomach the hammering they received last November. Even three months later, both continue to be in a state of concussion. Day in and day out, rather than representing the people they have been elected to represent and taking up their causes, the UNP seems preoccupied in fighting their drawn out internal leadership battle while the JVP seems resigned to its fate of a deteriorating vote base.

The UNP, if it’s interested in making any impact at the upcoming general election, must understand the fundamental fact that no one is bothered whether Ranil Wickremesinghe, Sajith Premadasa, or the former Colombo Mayor, the three-wheeler driver from Maligawatte, leads the party as long as it offers itself as a credible alternative to the current dispensation. Such a perception is nowhere on the horizon as far as the party rank and file are concerned. The party has completely missed the point that the demography of its voters has changed and will continue to change. None of the millennials will vote for the UNP just because their parents did. That is now history. Neither are they interested in talk shows or campaign rallies that offer only words and promises. This is the bitter lesson that Premadasa should have learnt after addressing 150 campaign rallies in 30 days. Faces don’t translate to votes. Ask Gotabaya Rajapaksa, who did not participate in any talk shows and addressed only some 60 election rallies.

Today, people are openly questioning as to whom in the UNP is talking about their problems and current issues. They lament the soaring cost of living but no one seems to be bothered. The Millennium Challenge Corporation (MCC) agreement that was made out to be a monster that would destroy Sri Lanka is being “discussed”, the Bond Scam has well and truly boomeranged on the pre-2015 administration following the forensic audit, and now the SriLankan Airlines scam involving billions of dollars in kickbacks in the pre-2015 era is the subject of an international investigation on Airbus.

The fun fact is that these are the very same issues that cost the UNP the presidency, but it is becoming apparent that learning from its mistakes is not the party’s strong point. How else could one explain all this political capital going a begging? And so, the writing is on the wall for those who wish to see that that the leadership battle will be the final nail in the UNP coffin.

The downside is that a lack of a strong, credible Opposition can lead a country on the wrong path, however good the leaders may be. Democracy dictates a strong opposition.

The UNP failed in governance due to personality clashes. Now, the very same clashes have doomed it in Opposition. No individual can be bigger than the party itself. That is the simple fact that seems to be beyond the comprehension of its doomed leadership. Meanwhile, kudos to the President, who has understood the fundamental fact that what matters in the end is good leadership and not parties or party posititons.

August 4, 2019 bythemorninglk No Comments
Amidst much controversy, the United National Party (UNP)-backed Democratic National Front (DNF) that was to be launched tomorrow (5) is now hanging in the balance.

Saving SL from the drug scourge

August 30, 2020 bySarah Hannan No Comments
One of the main pledges of President Gotabaya Rajapaksa upon his election was to rid the country of the drug menace. With a reputation of keeping his word, the President has wasted little time