With the commencement of worldwide vaccination programmes, there is hope that the adverse effects of the Covid-19 pandemic would soon become more manageable and less aggressive, even though the health organisations around the world have said that a complete return to normalcy would not be possible in the foreseeable future. 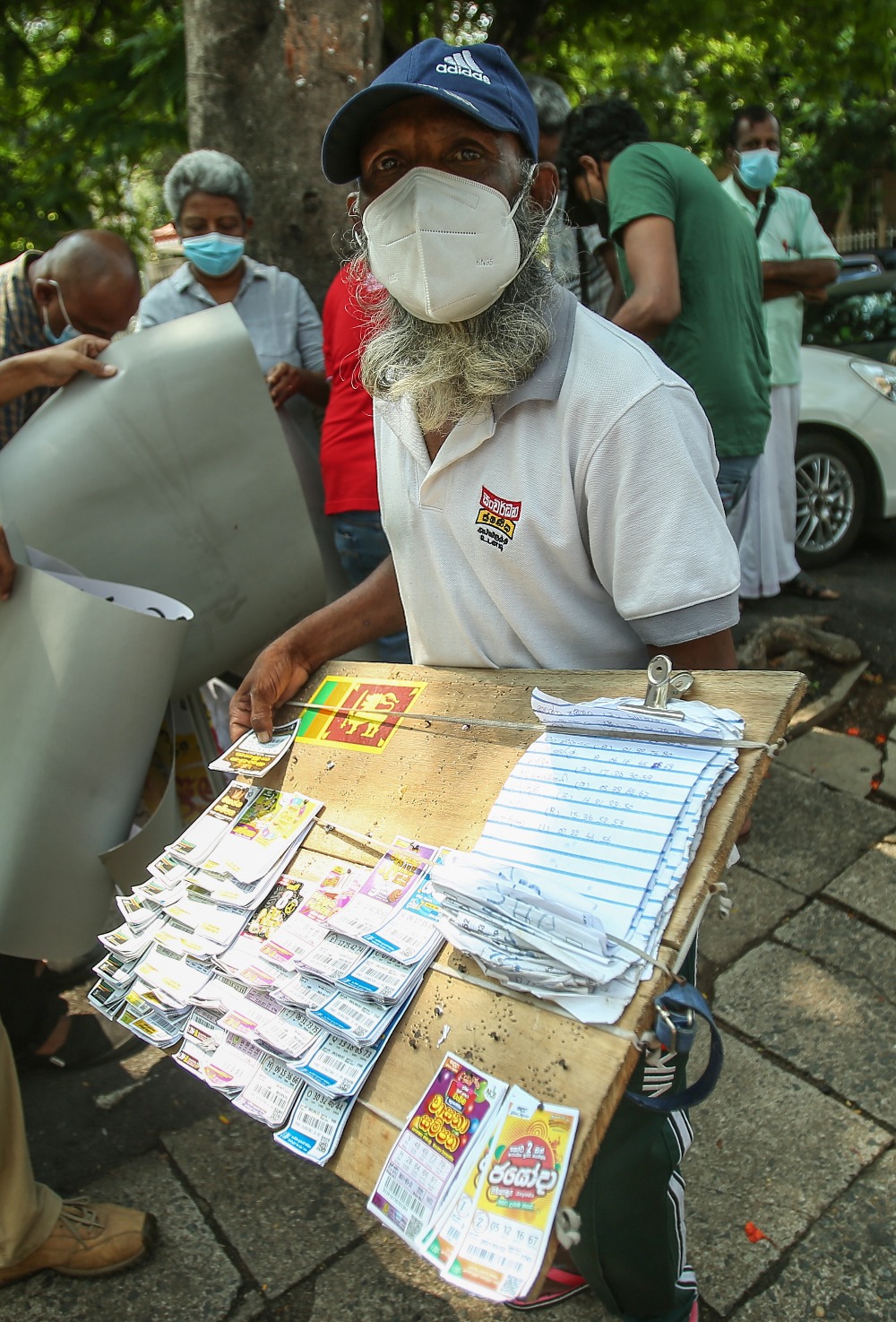 It is not just the lives of the people that are at stake; education, development projects, businesses and jobs are also facing a severe threat due to the Covid-19 pandemic. Countries have started addressing the issue of layoffs, which in most cases is a result of losses suffered by businesses and the lack of measures to ensure job security in times of crises.

International organisations such as the International Labour Organisation (ILO) have warned of unprecedented and unbearable job losses in the world, mainly as a result of Covid-19-related developments.

The Department of Labour recently announced that it has decided to conduct a survey with regard to private sector employees who lost their jobs owing to/during the Covid-19 pandemic. Even though the exact nature or objective of the survey is yet to be announced, the fact that the authorities have decided to pay attention to this matter, is a promising sign.

Commissioner General of Labour, Prabath Chandrakeerthi, earlier told The Morning that a decision on whether compensation would be given to those who had lost jobs would be taken in the future, after taking into account the findings of the survey.

The issue of job losses did not receive adequate attention last year, mainly due to it being subdued by the more pressing issue, i.e. health concerns, and today’s Spotlight focuses on what took place and is taking place concerning this matter.

What took place so far?

General Secretary of the Ceylon Mercantile, Industrial and General Workers Union (CMU), Sylvester Jayakody, said that even though a considerable number of organised private sector employees have received a part of their salaries in accordance with the agreement entered into by the Employers’ Federation of Ceylon (EFC) , trade unions and the labour authorities including the then Minister of Labour Relations Dinesh Gunawardena, in order to support the employees during the Covid-19 pandemic, a large number of private sector workers, particularly those who are not connected with trade unions and/or do not have agreements with employers, have not received such payment.

The approved salary scheme, according to Jayakody, was either Rs. 14,500 or 50% of the monthly salary – whichever is higher.

Jayakody further told The Morning that when Gunawardena served as the Minister of Labour Relations, the Ministry had appointed a task force for labourers, of which the former was a member. He said that during the Covid-19 pandemic last year, one of the major issues that was identified and discussed by this task force was employees not being able to report to work as usual and the companies being on the brink of bankruptcy due to the losses, which in turn compelled many companies to stop their operations.

He added that there were complaints regarding certain employers taking advantage of that agreement, and that in that context, the CMU had decided to pull out of the agreement in June last year. He stressed that even though the CMU pulled out of the said agreement, it is because of that agreement that hundreds and thousands of employees received at least a portion of their salaries. He added that employees of certain companies, where there were no trade unions operating, however, did not receive their salaries.

Speaking of the trade unions’ role in ensuring job security, he added that only around 5% of the country’s labourers are organised (connected with trade unions), and that where there are no such trade unions, the situation is unsatisfactory and that incidents of salaries not being paid as stipulated have been reported. Adding that the said agreement is in effect in many companies and that it is a legally accepted agreement, Jayakody said that those companies had paid around 99% of the employees’ salaries.

Describing the importance of service agreements, he added that the CMU represents a number of large companies, where no salary/payment-related issues arose, as the employees of those companies had agreements with their employers. “Where there are no such agreements, especially in small companies and in the apparel sector where there was no presence of trade unions, such issues arose,” he said.

Jayakody noted: “If a company does not give work to employees, it is the company’s responsibility to pay employees’ salaries. When it comes to salaries and job security, the country’s apparel and tourism sectors faced severe hardships. In the hotel sector, permanent employees did not face many issues as far as job security is concerned. However, since they did not receive service charge, which is a part of their salaries, they lost around 50% of their monthly income. Certain apparel sector companies connected with the CMU had to stop working from time to time, and some did not have enough work. However, most of them managed to make the Rs. 14,500 payment to their employees.”

Jayakody added that the employment of some employees, particularly those working in the manpower sector and those working as temporary/casual employees, have been temporarily withheld by their companies.

Speaking of the survey scheduled to be conducted by the Labour Department, Jayakody added that on 18 March, at the National Labour Advisory Council (NLAC), it was stated that only around 17 companies had filed complaints in that connection. He stressed that the real statistics pertaining to job losses and companies closures was much higher.

As pointed out by Jayakody, one of major sections of the country’s workforce who lost their jobs during the Covid-19 pandemic was those who did not have any form of support such as trade unions or any formal agreement ensuring their job security.

According to Protect Union’s General Secretary, Kalpa Madhuranga, informal sector employees have been left out by a number of mechanisms that are in place. He added that this is mainly due to the existing legal and policy framework concerning job security not being applicable to informal sector employees, which in turn has resulted in them not being included in programs conducted to revive the country’s workforce post-Covid-19 lockdown.

He added that according to a recent study conducted by the Protect Union and the ILO, around 90% of them had lost jobs during the Covid-19 pandemic, mostly due to their employers not allowing them to report to work during the pandemic.

He explained that Sri Lanka’s informal sector consists of people of diverse backgrounds who contribute to the country’s economy in various ways. Among them are domestic workers, nattamis (porters), three-wheel drivers, lottery sellers, businesses operating with less than 15 employees, street vendors and self-employed individuals.

When inquired as to the Government’s response concerning informal sector employees, Madhuranga added that his trade union had contacted the Government and the incumbent Minister of Labour in this connection. He noted that suggestions have been put forward concerning the job security of informal sector employees and that it has been requested that attention be paid to forming a legal framework for the protection of domestic employees.

When queried as to the present situation of informal sector employees in a context where the Covid-19 pandemic is becoming somewhat stable, he added that even though around 15%-20% of domestic workers have resumed their employment, they are forced to work in less favourable situations compared to the pre-Covid-19 era. According to Madhuranga, domestic workers are now facing issues due to employers attempting to exploit their labour.

A recent World Bank report said that Sri Lanka’s informal employment sector, which, according to the report, makes up approximately 70% of the country’s workforce, is associated with lower working conditions and earnings compared with the formal sector.

Meanwhile, when queried as to whether the Labour Department is planning to take any action in order to uplift the lives of informal sector employees whose jobs were affected during the Covid-19 pandemic, Chandrakeerthi told The Morning that there are no such plans for the time being, and that under the aforementioned survey, only the details of formal sector job losses would be collected.

He also said that as far as job losses during the Covid-19 pandemic are concerned, any future actions, including looking into the possibility of providing some form of relief, would be based on the findings of the said survey.

Both Jayakody and Madhuranga emphasised the need for Sri Lanka to introduce a social security scheme, as both private sector and informal sector employees have little job security in most cases, a fact which adversely affected them during the Covid-19 pandemic last year.

In this regard, Jayakody added that one of the major responsibilities of a Government is to ensure a good status of life for citizens, and that therefore, there should be a proper social security scheme for private sector employees.

Giving an example, he added that the Italian Government had been paying up to Euros 800 to those who had lost their jobs during the pandemic. He added: “Unlike in Italy, there is no social security scheme or what is known as the ‘dole’ in Sri Lanka. In fact, sometimes, the people face difficulties when getting their pensions as well. Private sector employees do not even have a pension. As a result of this situation, some private sector employees had to use their savings or the compensation they received, in order to start self-employment work after they lost their jobs, and in some cases, to find a new job”.

Speaking of what the informal sector employees expect from the Government, Madhuranga added that the ILO has introduced Domestic Workers Convention of 2011 (189) concerning the protection of domestic workers, which has been ratified by around 30 countries. He said that informal sector employees request the Sri Lankan Government to ratify it, and create a proper legal framework to protect domestic workers.

In addition, he added that Sri Lanka is in need of a certain social security scheme to help informal sector employees when they are in need of help, as within the existing legal and policy framework, they are not entitled to such benefits. Also, he said that a Wages Board should be formed for informal sector employees in order to determine their salaries and other perks.

Even though the issue of job losses began last year when the severity of the Covid-19 pandemic was much higher than now and lockdowns and curfew were in place, it is a long-term issue that may affect people’s lives for many years, if unaddressed.

In this context, every small step by the authorities is admirable; however, the end result should not be just addressing the issues of the formal sector, but all sectors, including those who have little job security under the existing legal and policy framework.

All school exams to proceed as planned

June 23, 2021 byNews Admin No Comments
Despite the rapid spread of the Covid-19 pandemic and the resultant closure of schools, the Education Ministry has planned to cover the school curriculums to the fullest extent possible and conduct th

Badulla PHIs on strike over ‘interference’

May 11, 2021 byNews Admin No Comments
The Badulla District Public Health Inspectors’ Union (PHIU) engaged in trade union protest action yesterday (10) by reporting on sick leave, claiming interference with regard to the conduct of their d