Let’s talk about it: Period

November 3, 2021 by Venessa Anthony No Comments

United Nations Population Fund (UNFPA) Sri Lanka partnered with the Endometriosis Association in Sri Lanka to host a virtual discussion on endometriosis and menstrual health at the Fourth Asian Conference on Endometriosis.

Menstruation is part and parcel of a woman’s reproductive journey, and the discussion held on 29 October on the topic “Let’s Talk About It. Period.” focused on menstruation and the stigma surrounding it. 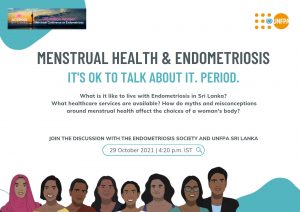 Professor of Obstetrics and Gynaecology Hemantha Senanayake opened the discussion by talking about what endometriosis is. “In brief, the lining in the uterus is called the endometrium; that’s where the term endometriosis comes from. These cells should only be present inside the uterus. When they grow elsewhere during menstruation, these cells will bleed too and when this happens the blood from these cells do not have a way to leave the body,” he explained.

He further stated that this will cause other complications, inflammation, and other symptoms in the tissues, which will result in adhesion of organs. Giving more details about symptoms, Prof. Senanayake explained that every woman’s symptoms can be different, adding: “They may include painful periods, pelvic pain in between periods, and pain during sex.”

Although it’s a common disorder, endometriosis can often be a mystery to women and healthcare workers alike.

Sharing her experience during the webinar, endometriosis survivor Arundathi Yasok explained that she began to experience symptoms as early as the age of 16 and they got more severe as she entered her 20s. “My bowel movements would be really painful and I would black out and during ovulation pain. I felt like something was coming out of me and felt chronic fatigue like a bus had hit me, even though all I did was exit the shower,” she described.

She also said that whenever she spoke to women about it, she was dismissed, being told that period pain was normal and that all women experience it.

Adding onto this train of thought, Prof. Senanayake stated that something seen very commonly in women suffering from endometriosis is that it takes about seven to 10 years of experiencing symptoms for them to seek professional medical help and get a proper diagnosis because period pain is something that is considered to be normal. He added that this is mostly caused by societal norms that women feel they must adhere to, since they are told periods are something women must tolerate since it is part of their life.

Yasok explained that deep inside she knew something was wrong and that level of pain cannot be normal. Prof. Senanayake explained that if you feel you can’t go to school, work, or engage in any physical activities because of the pain, and have to lie down all day, then that is a telltale sign of endometriosis. He urged women to get it checked out as it should not be considered normal.

Yasok added that her diagnosis happened by accident, adding: “I had a really bad leg pain and I was constipated, so when I went to the doctor’s, they made me do one scan since they suspected it was something in my head.”

Upon insistence from her husband, she did a second, third, and fourth hospital visit, and on the fifth one, she was seated thinking that she would be sent home again after being told “it’s all in her head”, but she was immediately rushed into the emergency room after being told that she needed to be operated immediately since her life was at risk. “It was really scary. After the surgery, I was told that I have stage four endometriosis, which is severe, but they failed to explain what would happen, what I should do, etc. and neglected to tell me that it would keep coming back,” Yasok stated.

Prof. Senanayake informed us that there are many treatment methods. “Sometimes, it can simply be treated with the right medication, but some women cannot be treated like this and they have to go through surgery.”

He also highlighted the importance of getting it diagnosed professionally and working towards a healthy, pain-free life.

September 16, 2019 byThe Sunday Morning No Comments
The first organisation founded in Sri Lanka with the objective of preventing suicide, Sumithrayo is not an organisation that wouldn’t take World Suicide Prevention Day without notice.

February 10, 2021 byNews Admin No Comments
“What is love? Baby don't hurt me. Don't hurt me. No more.” I jape. No. But seriously, what IS love? Is it that ineffable and irrevocable sensation of affection? Is love a myriad of emotions..