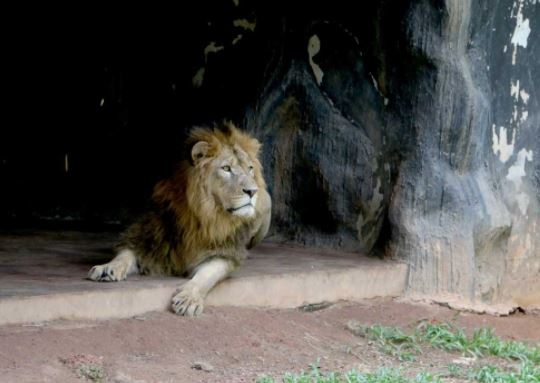 The condition of the 14-year-old lion named Thor, who was infected with Covid-19 at the Dehiwala Zoological Garden, is clinically normal albeit medically unhealthy, and out of the danger zone, according to the Sri Lanka Veterinary Association (SLVA).

“The condition is not critical, but this is a post-Covid-19 condition. We are treating the lion to the best of our ability. It is currently under medical care in isolation, and necessary measures have been taken to prevent other animals from contracting the virus”, he told The Morning.

Dr. Pemachandra said that Thor is suffering from Immune Mediated Thrombocytopenia (IMTP) and Immune Mediated Hemolytic Anaemia (IMHA). IMTP is a condition where the body’s immune system, which normally fights infections, starts to damage and destroy platelets, which are cells required to clot blood and prevent bleeding. IMHA is an autoimmune disease where the body attacks its own red blood cells that can in turn lead to a very low red blood cell count (anaemia) that will in turn require multiple blood transfusions to be remedied.

He also added that since the chimpanzees and orangutans in the Zoo could also contract the virus, safety measures have already been put in place.

State Minister for Wildlife Protection, Adoption of Safety Measures including the Construction of Electrical Fences and Trenches, and Reforestation and Forest Resource Development Wimalaweera Dissanayake also confirmed Thor’s condition, where the animal is having difficulty breathing due to phlegm, and said that treatments were taking place.

New Delhi Television Limited (NDTV) media reports also confirmed that Sri Lanka’s main zoo had on 2 July said that it was seeking Indian help to treat a lion that had tested positive for Covid-19, the first such animal in the island known to be infected by Covid-19.

Thor’s rectal tests revealed that the lion was infected with the B.1.1.7 Alpha variant of Covid-19, a few weeks back. The tests were carried out by the Sri Jayewardenepura University’s Immunology and Molecular Medicine Department. The Dehiwala National Zoo announced that he had tested positive for Covid-19 on 18 June.

Thor was brought to Sri Lanka from South Korea in 2013.

According to the World Health Organisation (WHO), the transmission of Covid-19 can occur through direct, indirect, or close contact with infected people through infected secretions such as saliva and respiratory secretions, or their respiratory droplets, which are expelled when an infected person coughs, sneezes, talks, or sings.

Airborne transmission is defined as the spread of an infectious agent caused by the dissemination of droplet nuclei (aerosols) that remain infectious when suspended in the air over long distances and periods. A person can be infected when aerosols or droplets containing the virus are inhaled or come directly into contact with the eyes, nose, or mouth.

However, as explained by Dr. Pemachandra, while humans can spread the virus to animals in certain situations, the reverse cannot take place.

September 30, 2021 byAazam Ameen No Comments
Foreign Secretary Harsh Vardhan Shringla is scheduled to visit Colombo in early October, official sources in New Delhi had told The Hindu, as India and Sri Lanka seek to engage at high levels amid a p

May 12, 2022 byNews Admin No Comments
Unrest in addition to economic reasons cited for leaving