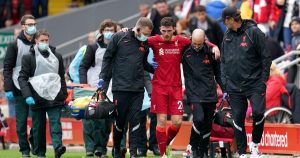 A week before the new Premier League campaign, Jurgen Klopp could have another sizeable headache to contend with. Scottish National Andy Robertson, one of the club’s most consistent and durable performers, hobbled off during the pre-season friendly draw with Athletic Club at Anfield on Sunday (8). Robertson went over on his right ankle blocking a cross from Alex Berenguer, shortly before half-time. The pain was immediate, but he gingerly rose to his feet a minute or so later, and walked off the field.

On the bright side, Liverpool were able to give Virgil van Dijk his first outing on home soil in more than 10 months. The centre-back managed 71 minutes alongside Joel Matip. He might not be ready for the Premier League opener against Norwich next weekend. And Liverpool have Matip, new-signing Ibrahima Konate, the returning Joe Gomez, and the new cult hero Nat Phillips to choose from, for their defence.

French forward Anthony Martial is the man Inter Milan want to replace Chelsea-bound Romelu Lukaku. Manchester United are looking at transfer fee close to £ 50 million (Rs. 13.8 b) which they spent six years ago, to get the French striker from Monaco. Lukaku has almost secured his transfer back to Premier League two seasons after leaving Old Trafford for Italy.

The Belgian will get his wish of a return to Stamford Bridge once Chelsea had convinced Inter over deal worth £ 97.5 m (Rs. 26.9 b). Once the deal is complete, Inter will immediately work on the deal with Man United to land Martial, who they first tried to sign two years ago. Ideally, Inter hope to get him on a season-long loan, and although United prefer a permanent deal, they would agree as long as it included a commitment to buy in 12 months. The two clubs have a good relationship, having previously done business for Ashley Young and Alexis Sanchez.

The French giants PSG have offered Lionel Messi an initial two-year deal, thought to be worth £ 25 m (Rs. 5.5 b) a year after tax, and the six-time Ballon d’Or winner and his representatives are now reviewing and considering it carefully.

Messi also has two other potential options after leaving Barcelona but PSG remain the favourites to sign him. Barcelona announced Messi would not continue at the club after they were unable to fulfil a new contract that had been agreed with the player due to “financial and structural obstacles”. The Argentina international has spoken directly with PSG Head Coach Mauricio Pochettino this week about moving to the French capital. Asked if PSG will be his next move at his farewell news conference on Sunday, Messi said: “That is one possibility, to reach those heights.”

Sergio Aguero has denied reports that he wants to leave Barcelona following Lionel Messi’s exit. Aguero joined Barca on a free transfer earlier this summer after reaching the end of his final contract at Manchester City, where he had spent the previous ten years of his career. He was looking forward to link up with fellow countrymen at club level, but that dream has been dashed as Barca failed to re-sign the six-time Ballon d’Or winner.

India win fourth cricket Test at the Oval against England

September 7, 2021 byRevatha No Comments
Take an unassailable 2-1 in lead in the five-match series

India U-19 stars can be ‘million dollar babies’

February 8, 2022 byNews Admin No Comments
After India clinched their record fifth International Cricket Council (ICC) Under-19 (U-19) World Cup last Saturday (5) in the West Indies, the top Indian performers of the event can now become “milli