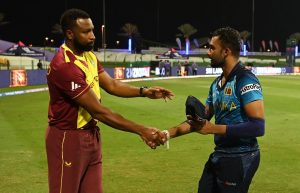 Will Shanaka have to get a leaf out of West Indies’ cricket books?: Here is West Indies white-ball Captain Kieron Pollard (on left) congratulating his Sri Lanka counterpart Shanaka in a T20 World Cup match in Abu Dhabi in November last year. Photo Gareth Copley/ICC

Dasun Shanaka’s One-Day International (ODI) captaincy is hanging by a thread as his predecessor and current national Test skipper Dimuth Karunaratne is likely to be reappointed as Sri Lanka (SL) ODI Captain, leaving Shanaka only the Twenty20 International (T20I)  Captain of the country.

Sources revealed yesterday (23) that lobbying has already begun aiming to remove Shanaka from his ODI leadership and bringing in Karunaratne back into his former position.

The reason: Alleged deterioration of the team’s confidence on skipper Shanaka.

Will the ODI format be removed soon from Shanaka’s duties as Sri Lanka limited-over or white-ball leadership and, if so, why?

The closest example is coming from the West Indies.

Their white-ball Captain Kieron Pollard had to step down not only from his captaincy but from his international career as well last week. Pollard too was, like Shanaka, a specialist white-ball player, a batting all-rounder.

Reports said that the newly appointed West Indies Head of Selectors Desmond Haynes had told Pollard that he didn’t derive due respect from his team.

Problems had erupted in January when Odean Smith was controversially dropped from the West Indies team during a white-ball home series against England. Smith was replaced by another Jamaican, Rovman Powell but Smith’s omission was reported as “a victimisation” by Captain Pollard.

The issue created ripples in the West Indies’ set up. Both Phil Simmons, their Head Coach, and the Ricky Skerritt-led Cricket West Indies (CWI) were reluctant to accept, yet the rifts between Pollard and the team had been widening, reports had suggested.

Eventually on Thursday (21), Pollard retired not only from his captaincy but from his entire West Indies duties and is now expected to focus only on franchise cricket, round the globe.

In a statement released in January, CWI had said it was aware that “voice notes were circulated on social media, and in sections of the regional broadcast media, suggesting that there is a rift within the West Indies senior men’s team.”

CWI further said in that statement: “Contrary to the unsubstantiated statements, containing unfounded and mischievous allegations, CWI is satisfied that there is no discord between the team Captain and any member of the West Indies team.”

It was from there that things began to unfold ending up in their white-ball skipper Kieron Pollard’s being out of the scene barely three months later.

A former national selector told The Sunday Morning Sports yesterday (23), on the condition of anonymity, that the authorities which had stood for Shanaka are now seemingly deviating from him.

“The cricket board (Sri Lanka Cricket or SLC) and the legends who run the sport in this country are now accepting that Shanaka should leave ODI captaincy and Dimuth needs to be appointed in his place,” he said.

Unlike in the West Indies example, the only obstacle to this new move here is said to be the National Selection Committee Chairman Pramodya Wickramasinghe, the source pointed out.

“If the selectors tend to control the national team by keeping its Captain under their obligations, there’s no wonder that we are losing continuously,” added the former selector.

Again, in the West Indies situation, their former Head of Selectors Phil Simmons, who held that position since 2019, was replaced by Desmond Haynes in January.

“Some of the officials prefer to have Shanaka in the same position because they could wield their influence on the team using Shanaka as a proxy,” opined the source.

The Sunday Morning understands that the duration of the tenure of the National Selection Committee, comprising Wickramasinghe, Romesh Kaluwitharana, and Hemantha Wickramaratne who overlook senior men’s selections, has been extended by a couple of months, mainly due to the volatile situation in the country’s economic and political spheres.

Their two-year tenure has otherwise been elapsed, it is learnt.

Their first assignment will be the two-match Test series in Bangladesh starting on 15 May. Sri Lanka white-ball team’s next series will be the home series against touring Australia which will comprise a three-match T20I and five-match ODI series, to be held from 7 to 24 June.

“Tactics without strategy is the noise before defeat” – Malinda Seneviratne Column

April 6, 2021 byRevatha No Comments
The Interception by Malinda Seneviratne

England go back up in ICC ODI rankings

September 9, 2022 byNews Admin No Comments
A second consecutive loss in the series against Australia saw New Zealand drop to second place in the MRF Tyres ICC Men’s ODI Team Rankings.
As a result, England have moved to the top of the ICC ODI T