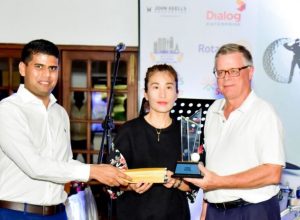 John Keells Properties (JKP) participated as a silver sponsor for the annual Dialog Enterprise Rotary Metropolitan Par-3 Golf Classic, highlighting its contribution over the years to the golfing community in Sri Lanka. The fundraiser tournament, organised by the Rotary Club of Colombo Metropolitan in partnership with the Royal Colombo Golf Club, was not just a highly-anticipated event on the golfing calendar, but also a means through which sponsors, organisers, and participants were provided with the opportunity to donate funds towards various worthy causes.

Myungock Jane Hong emerged as the Overall Gross Winner for the tournament, with Kathey Twenbold earning the title of Overall Nett Winner. Afflli Raheem, Somanath Fernando, and Muditha Premathilake, took winning spots at the A, B, and C Division games respectively, with Raja Nagalingam winning the Masters game and Yun Jeong Choi the Ladies tournament. Additionally, the Seniors Cup went to Mohan Wikramanayake, and Kaya Daluwatte triumphed at the Juniors tournament. In the photo is JKH Property Sector Assistant Vice President/Head of Sales Nadeem Shums (left) and Michael Beamish (right) present the award to the winner of the Ladies Tournament, Jeong Choi.

The Masters Basketball Inter-league semi-finals were held last week at the Sugathadasa in Colombo. The men’s category comprised of age groups of Over-35, 40, 45, and 50 while in women’s, there were two age groups, Over-35 and 40. The competition also became the criterion for the selection of the team for the Pan Pacific Masters Games, to be held in Gold Coast, Australia, later this year. Sports promotions company Gaja Sports sponsored the event. In the photo is champion men’s Over-35 team with their trophy 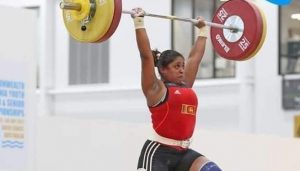 Four have been picked to represent Sri Lanka at the Asian Senior Weightlifting Championship, the qualifying event for Tokyo Olympics 2020, which will be held from 16 to 25 April at Tashkent, Uzbekistan. They are: Dilanka Isuru Kumara (below 55kg weight class), Indika Chathuranga Disanayake (below 73kg), Thilanka Viraj Palangasinghe (below 61kg), and Chathurika Priyanthi (below 81kg). They were selected due to their national super squad performances and their achievements in international competitions. Seen in the photo is Chathurika Priyanthi. 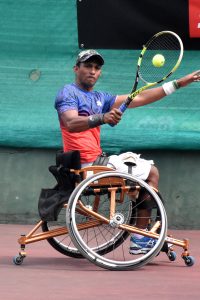 December 11, 2020 byRevatha No Comments
After Diego Maradona, the Argentine hero who lifted the Cup in 1986, Italian hero Rossi joins him following long illness