Local Sports – Week Past, Week Ahead: A gold rain for Sri Lanka at Asian Weightlifting

The above tournament in scheduled to be held from Friday to Sunday, 7 to 9 January at the Sri Lanka Tennis Association in Colombo. The entries will close tomorrow (3).

The tournament is for boys and girls in singles Under-14 and 18 age groups.

Shenuki Dishalya won four golds including the overall championship in the 47 kg weight class. During the tourney, she broke her Sri Lankan record as well. Dishalya, still a student of Bishop’s College – Colombo, is engaged in gymnastics and swimming too, in addition to weightlifting.

He won the Asian Championship in the category for the fifth time. 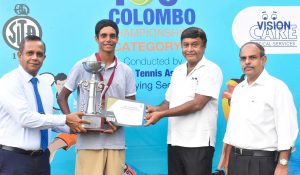 Tiana Piyadasa becomes No. 1 in USA Under-10