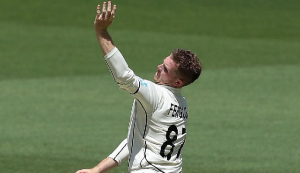 New Zealand fast bowler Lockie Ferguson has been ruled out of bowling for the rest of their Test against Australia after picking up an injury on day one in Perth.

Ferguson bowled just 11 overs on Thursday, 12 December, before going off the field in the second session. He was sent for scans, with the team later confirming a right calf muscle-tendon strain. It means he won’t bowl any further in the Test, but is available to bat.

Ferguson’s ability to hit good speed was expected to be an asset for the visitors on the Perth surface. Just before tea, he had been denied his maiden Test wicket when Tom Latham dropped Steve Smith in the slip cordon.

His forced absence adds to New Zealand’s concerns. Ferguson’s debut came because Trent Boult, New Zealand’s premier pacer, is still recovering from a side strain. It now leaves Tim Southee and Neil Wagner as the team’s main pace bowlers, with all-rounder Colin de Grandhomme backing them up. The visitors fought hard, but Australia finished the first day comfortably on 248/4.

“Gutting, ain’t it,” Wagner said after the first day’s play, about his teammate’s injury. “It’s just one of those things. It’s pretty heart-breaking for him. I know he’ll be devastated as well. We all obviously get right behind him … He’s a quality player and we would have loved to see him bowl more and see what he could have done.”

Marnus Labuschagne, who finished the day unbeaten on 110, admitted that it gave Australia an advantage. “They do have an all-rounder in their side so it does lighten the load a little, but it’s a massive advantage if we can really bat well tomorrow and keep them out there,” he said. “We just have to keep putting those runs on the board.” ICC

The rise and fall of the proposed European Super League (ESL)

April 23, 2021 byRevatha No Comments
A historic victory for the true spirit of sports

On This Day – 23 November: Happy birthday Warnaweera and Kapila Wijegunawardane

November 23, 2021 byRevatha No Comments
Memorable moments in sports on this day