Sri Lanka’s ability to provide key commodity imports, such as fuel and liquefied petroleum gas (LPG) to its citizens has been restricted due to the shortage of foreign reserves.

A country’s foreign reserves refer to the expendable foreign currency denominated assets held by the Central Bank. In the past three years, Sri Lanka’s reserves experienced two significant adverse events. First, reserves declined to the point that short-term outflows exceeded total reserves. Second, the share of short-term funds that needed to be rolled over regularly increased to become the majority of foreign exchange reserves.

How bad is the decline?

In January 2021, reserves became insufficient to meet the pre-determined short-term (twelve-month) foreign currency outflows, due to obligations of the Government or Central Bank. As is evident in Figure 1, since January 2021, the gap between short-term outflows and reserves has been widening.

The resulting impact was dramatic: the reserves balance that stood at $ 7.6 billion at the end of 2019, decreased to $ 0.3 billion by April 2022. The $ 0.3 billion was sufficient only for four days’ worth of imports. This balance excludes the $ 1.5 billion Chinese swap agreed in March 2021. Sri Lanka never met the required reserves threshold (amount equal to three months of imports) to be able to use the swap funds. However, these funds were incorrectly recorded as usable reserves in December 2021. In June 2022, Government officials attempted to renegotiate the terms of use of the swap with no avail. Therefore, as of now the swap is still unusable.

The proportion of short-term swaps in reserves increased from 27% at the end of 2014 to 97% as at the end of February 2022 (Figure 2). The maturity period of swaps is what is problematic in this scenario. Swaps are considered to be short-term financing instruments, and their repayment is classified as a short-term outflow.

As of June 2022, the reserves balance has been maintained at $ 0.3 million with swaps accounting for 99.6% of reserves. This increase in the share of swaps indicates that reserves are still insufficient to meet short-term outflows. 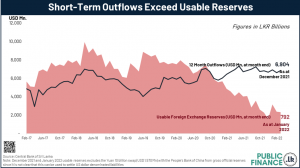 SF warns of a rise of a dictator

February 7, 2020 byTSM Web Desk No Comments
United National Party(UNP) Parliamentarian Sarath Fonseka said that the government’s attempt to abolish the 19th Amendment will give rise to a dictator.