Unrest continues to develop in areas that have been placed under isolation for the sixth week, especially where people reside in flats built for low-income families located in the middle of the commercial capital of Sri Lanka.

Last week, families left their flats and gathered near the barricade to protest and voice their woes. By now, the people have had enough of waiting for the Government to provide them relief and being asked to manage for an entire month with Rs. 5,000 per family, it is observed.

“We had enough of being asked to stay at home; we do not need any relief from the Government. All we are asking is that the Government allow us to go back to our daily work,” one resident lamented.

Another interjected, saying: “We don’t even know whether we have those odd jobs anymore because we have not been able to go to work. More than that, how can we continue to just feed one meal a day to our children? They don’t understand that we have run out of money and cannot afford to feed them.”

The increasing cost of living is not helping the present situation either, although the Government had promised to control prices for certain commodities, but that too is not taking place as traders are said to be purchasing goods at a higher price and are not in a position to sell them to consumers at a lower price.

Even the Government’s gazette notices seem to be misinterpreted. When The Sunday Morning asked about the control prices and why items cannot be sold at the said price, an official affiliated to the Ministry of Trade said that consumers can purchase goods at the controlled prices at Sathosa or Co-Operative shops.

A resident of “Methsanda Sevana” noted: “Since we are in isolation, we only have access to the grocery shop near our flat. The vendor says he is unable to sell goods at the given price as he will run at a loss, considering the transport cost he has to incur to get the goods to his shop.”

According to the Department of Census and Statistics (DCS), the national average of the national poverty line shot up by Rs. 23 in November with the average now reading at Rs. 5,114, which is the minimum amount required by one individual to cover the basic requirements per month.

The Sunday Morning spoke to Advocata Institute Chief Operating Officer (COO) Dhananath Fernando on their evaluation of the level of poverty in Sri Lanka following the outbreak of Covid-19.

“We need to think along the lines of their employment status and their opportunities to generate an income. For the lower-income families, their only tradable asset is their labour; this is not limited to the most vulnerable of society, but the majority of the workforce in Sri Lanka,” he commented.

Fernando added that with most of these personnel working in the informal sector, the impact of this pandemic on their earnings cannot be easily gauged. Many of them work for a daily wage and get paid for contributing their labour when the businesses are in operation.

“However, the current situation is such that there are only limited businesses that are functioning; we are seeing an excess in the informal labour force due to unemployment. This in return has created another issue where the daily wage will be lowered, which in turn will have a larger impact on a person’s poverty level,” Fernando elaborated.

Meanwhile, the World Bank (WB) in October stated that following the end of the civil war, Sri Lanka’s economy had grown at an average of 5.3% during the period from 2010-2019. In 2019, it had grown by 2.3%. However, the WB observed that at the end of the first quarter for 2020, the economy had once again contracted by 1.6%, based on the year-on-year performance.

It is believed that the destabilisation of the economy of the first quarter was largely due to the Covid-19 crisis and has trickled down to the second quarter as well. With tourism being non-operational since April to date, that too has brought the economy to a standstill, further faltering the growth.

The WB observed that the Covid-19 crisis is believed to have triggered sharp jobs and earnings losses. Informal workers – about 70% of the workforce – are particularly vulnerable, as they lack employment protection or paid leave. The apparel industry, which employs about half a million workers, has reportedly cut jobs significantly. While agricultural production is expected to be largely undisrupted, weak external demand has likely impacted export-oriented subsectors and wages. Also, high food price inflation, which remains at double-digits, is disproportionately affecting the poor.

Last week, senior economist Dr. W.A. Wijewardena stated that there will come a day when a person’s income will not be sufficient to push a person above the poverty line, and if it happens to a larger part of the population, it will become a dangerous situation.

Dr. Wijewardena’s suggestion was that a cap be introduced on the country’s inflation, which should be done through the Treasury and the Central Bank of Sri Lanka, which would assist in stabilising the National Consumer Price Index (NCPI).

“If there is a cap on the inflation, then the poverty level too can be brought under the threshold level,” he opined.

Unemployment on the rise 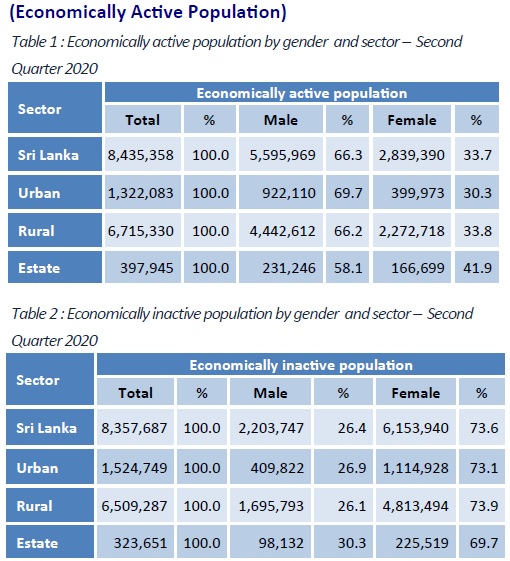 The highest unemployment rate is reported from the G.C.E Advanced Level (A/L) and above group, which is about 10%. Corresponding percentages are 6.3% and 14.2% for males and females, respectively. Female unemployment rates are higher than those of males in all levels of education.

All set for two-horse race