November 10, 2021 by Venessa Anthony No Comments

Jetwing Vil Uyana, Sigiriya, with the help of Experiential Manager and Resident Naturalist Chaminda Jayasekara, recently captured what most would claim to be a wonder of Mother Nature. They discovered the nesting site of the hotel’s resident crocodile. 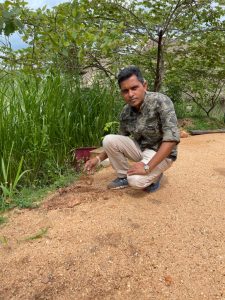 Brunch spoke to Jayasekera to get a glimpse of the natural wonders at Vil Uyana.

The hotel opened in 2006 and is about to celebrate its 15th anniversary this year. Jayasekara described the hotel to be a created wetland. Vil Uyana is a private nature reserve created on neglected agricultural land, comprising a wetland ecosystem with lakes, reed beds, working paddy fields, and reforested areas. He said the 36 luxurious dwellings are integrated into a wetland reserve of just five acres, despite the property spanning 28 acres.

During his 15 years at the resort, Jayasekara told us that one crocodile was consistently found at the property, after having taken to the wetland, but there have been three other visiting crocs that he has sighted during his years there as well.

The mother crocodile, which has been with the hotel since the beginning, laid eggs on the night of 12 August. Drawing a picture of this magical moment, Jayasekara described: “It was around 9.30 p.m; I was doing my usual rounds when I saw the crocodile digging a hole. The next morning, when walking past, I noticed that she had covered the hole, which shortly after I discovered to be a nest, with soil.” 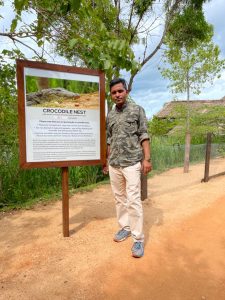 He added that the crocodile is usually quite docile and does not mind him, but that particular morning she hissed at him, which, he commented, was unusual behaviour for her. But he bided his time, waited for her to return to the water, and later, upon closer inspection of the hole, he spotted the outline of eggs and was overjoyed.

“This was an incredible sight, as it is the first time any croc has nested at Jetwing Vil Uyana. And personally, this was the first time I saw the crocodile eggs in all my career,” he expressed, adding that in order to give them adequate protection from other predators in the area, he erected a 10-metre-long fence and placed a notice there with all the details of crocodile nesting to alert guests.

After 77 days of the hatching period, which is sometime early this month, Jayasekera told us that at about 9.30 p.m., they heard the soft crooning of the baby crocs. “I walked closer to see the mother digging up the nest; from that point until the next morning, 20 crocodile babies were hatched,” he shared.

He explained that when a mother crocodile hatches her eggs, she collects them gently in her mouth and takes them to safety – in this case, to the water’s edge of the lake surrounding the hotel. “This has often been misinterpreted in the past as the mother eating them, but I witnessed her taking not only babies, but also some eggs, which she did in two shifts. I’m so lucky to have witnessed this in my lifetime,” he stated. 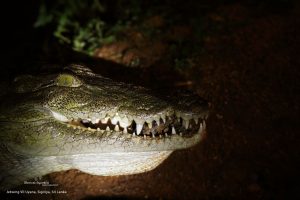 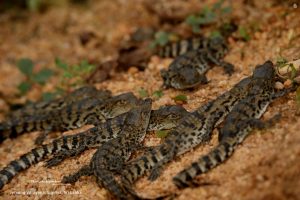 Jayasekera is now tending to the hatchlings with great care, and he is so glad that the mother allows him to check on the babies, even though she’s mere feet away. He told us that at the resort, all the animals have come to trust him and allow him to tend to them and have a close connection with them. The resort is truly a safe haven for wildlife.

We asked him if he had spotted any other interesting or rare species on the property, to which he said that rare and threatened species that are reliant on water, such as otters and fishing cats, now thrive within the hotel premises.

“The forested areas also support a resident population of the protected grey slender loris – first observed in October 2010, with numbers growing each year. Presently, over 150 species of birds, 27 species of mammals, 51 butterfly species, 15 species of dragonflies, 10 species of frogs, and 29 species of reptiles are found within the hotel premises,” he informed us, adding that one can find species like the slender loris, rusty spotted cat, and the Eurasian otter as well. 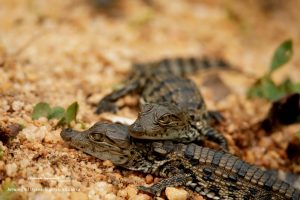 He urged guests to visit the resort if they are animal lovers, after explaining how rich the biodiversity and flora and fauna is at the property.

Grave sexual abuses and what to do about it

July 26, 2020 byJennifer Anandanayagam No Comments
Punishment vs. root cause; what to be done about it.

Support our communities: Sriyal Nilanka on helping the marginalised and overlooked

April 29, 2020 byJennifer Anandanayagam No Comments
Sriyal Nilanka has been an avid presence in conversations around the PLHIV (People Living with HIV) community.