Mahela to supervise national teams at all levels? 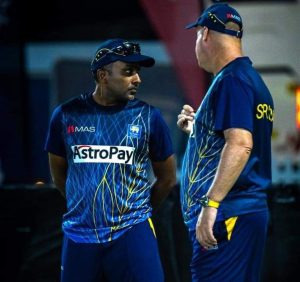 Mahela Jayawardene, seen on left here with Sri Lanka Head Coach Mickey Arthur in Oman last month during the T20 World Cup First Round, is likely to take up a high position in national cricket after the possible departure of Arthur. Photo SLC

“We have planned out a new structure and we are waiting for the approval for that. The Board (Sri Lanka Cricket or SLC) and all have to confirm whether it is okay. Only then that we’ll have to see how to proceed,” SLC Technical Committee Chairman Aravinda de Silva told the Morning yesterday (18).

Asked whether the SLC and the Technical Committee is contemplating on the possible replacement for Sri Lanka Head Coach Mickey Arthur, de Silva said they will look into the matter only next week.

“Not yet. We have to finish our evaluations. Mickey will anyway be there till December. Only on Monday (22) that we (the Technical Committee) will have a meeting where we are going to decide on that,” he said.

On 5 November, we reported that Arthur’s two-year contract with SLC is unlikely to be extended and on the same day, English media had revealed that the Coach was tipped to take up the vacant Head Coach’s position of the English county, Derbyshire to succeed Zimbabwean David Houghton, who stepped down as Derbyshire Head Coach at the end of the 2021 season.

The official announcement from the Derbyshire administration, though, came only Wednesday (17).

“No names have been shortlisted (for possible vacancy to be created by Arthur) so far because we have to first check (with Arthur) and then only we are going to interview and look at other options. We’ll have to see if we are going to retain him or what. After that only, we are going to decide as to what we are going to do next,” De Silva explained.

But in our same 5 November report, we asked thus: “Who will be Sri Lanka’s next Head Coach? There are to names that have cropped up – Roshan Mahanama and Naveed Nawaz. Out of those two, Nawaz is going to be the strongest candidate to replace Arthur.”

“Sources further revealed that, though Mahanama is the strongest contender for the post of Sri Lanka’s next Head Coach, the former opening batsman and world champion player has displayed a weakened interest lately in taking up the responsibility,” we also added then.

“Nawaz, 48, in such context, will be the closest to take up the post. The former D.S. Senanayake College, Colombo left-handed batsman and 1993 Sri Lanka Schoolboy Cricketer of the Year, Nawaz had played one Test and three One-Day Internationals for Sri Lankan during 1998-2002,” the 5 November report also mentioned.

Since July 2018, Nawaz has been Bangladesh Under-19 Head Coach, during which period he guided the youngsters to the 2020 Under-19 World Cup victory, the first major global tournament win for Bangladeshi cricket at any level.

But, reportedly, there is one obstacle for Nawaz’s possible appointment. Some players of the Sri Lanka national side are allegedly having reservations to work with him, for reasons that are unclear at the moment.

England vs. India Cricket: Old Trafford cancellation and the Ashes

‘We are investigating several people in Sri Lanka’ – Alex Marshall

October 18, 2018 byRevatha No Comments
There was no list submitted as has been speculated. We absolutely did not submit any list. - Marshall

Mahela to supervise national teams at all levels?