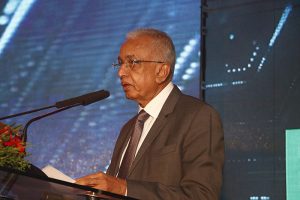 Indian automotive giant Mahindra and Mahindra Limited will open a vehicle assembly plant in Sri Lanka with an investment of $ 50 million by August this year with an eye on the export market.

The plant, currently under construction in Welipanna in the Kalutara District, will be a joint venture between Sri Lanka’s Ideal Motors Limited, which will hold a 65% stake and Mahindra, Mahindra while Mahindra will hold a 35% stake.

Speaking to The Sunday Morning Business, Ideal Group Deputy Chairman Aravinda De Silva stated that upon the completion of the plants, 100 units would be assembled per month while it would be expanded to 1,000 units per month later.

During an event on Wednesday (27) Development Strategies and International Trade Minister Malik Samarawickrama said that this investment would create ‘green collar jobs’.

“Mahindra and Mahindra group with Ideal motors are setting up a plant in Welipanna to assemble vehicles with an investment of over $ 50 million. What will make this venture important is that it would create what are called ‘green collar jobs’ which are jobs in sectors that are green, clean and sustainable. These are the jobs of the future,” he said.

The plant has been developed within one year under the expertise of the Mahindra team and will incorporate global technologies.

During an event today (27) in Colombo, Mahindra Automobiles Chief of International Operations Arvind Mathew said that this would be the first Mahindra assembly plant built outside India.

Ideal Group Founder and Executive Chairman, Nalin Welgama added that Ideal would consider exporting assembled vehicles but that it was premature to elaborate on the export plans.

“The assembly project is going to be Sri Lanka’s first proper assembly plant together with an internationally renowned auto major such as Mahindra.  Some of the seating of cars will be completed here in Sri Lanka. These will be 1,200cc cars. Thereafter we can think of exporting it to other countries,” he said.

The joint venture to set up this plant was entered into in April 2018.

Earlier last year, the two companies also entered into a joint venture to set up a vehicle assembly plant in Kalutara, with an investment of Rs. 2.5 billion and the construction of the plant commenced in last September.

Ideal Motors Limited is a fully owned subsidiary of Sri Lanka’s Ideal Group while Mahindra & Mahindra Limited is a billion-dollar global enterprise headquartered in India, and the two companies have been in a 10 year long partnership.

May 26, 2021 byNews Admin No Comments
The economic package is being prepared with an aim to support key sectors of the economy that have been hit by localised lockdowns during the second Covid-19 wave in the country, according to people q