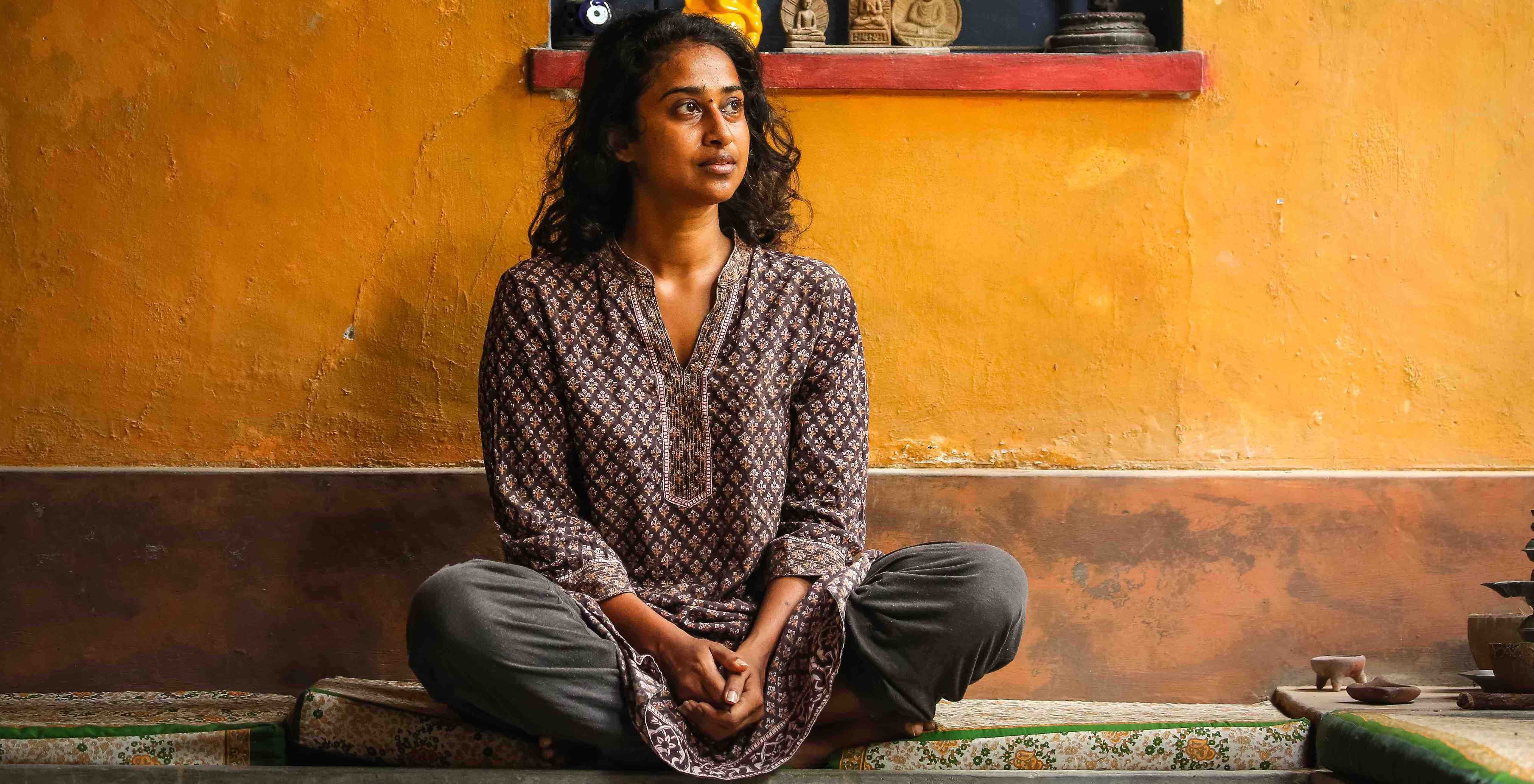 September 6, 2020 by Naveed Rozais No Comments

In conversation with choreographer and performance artiste Venuri Perera

The arts and creative industry’s relationship with the pandemic is a curious one. On the one hand, with the whole world coming to a virtual halt and reflecting on things like the sustainability of our way of life, creativity has experienced a bit of a boom, with artists being able to devote time and focus to their craft in a way they weren’t able to before unless they were full-time practitioners. On the other hand, the sheer uncertainty and the economic impact of the pandemic have done much to stifle creativity.

Life always finds a way though, and the adaptation of the global population to online interaction and life was remarkable across the board, with how we experience life being changed forever. Creativity too found a way to rise above the noise, with virtual viewings, performances, and art forms taking shape in ways we never expected.

The Sunday Morning Brunch caught up with veteran performing artist Venuri Perera to learn more about how she managed to balance things during the pandemic and to discuss her upcoming virtual performance in the groundbreaking performance piece Multitude of Peer Gynts, a contemporary theatre collaboration of Asian and South Asian performance-makers based off a rereading of Henrik Ibsen’s play Peer Gynt.

Perera is a dancer and performing artist who explores contemporary approaches to dance in Sri Lanka, blending dance, theatre, and live art to push the boundaries of performance art and harness the transformational power of performing.

Perera has been dancing as long as she can remember, learning at the Chitrasena Kalayathanaya under Vajira Chitrasena and then Upeka Chitrasena.

Always actively involved in dance at school, Perera began choreographing dances for her little group for interschool events before going on to do her first creative dance performance with the Chitrasena Dance Company from the age of 13; her first performance was in the Chitrasena production Nala Damayanthi.

Perera has always believed in portraying powerful and poignant messages through her art and holds the firm belief that artists have a responsibility to use their voice to highlight issues that are important to them and the societies they live in.

Perera’s most notable recent works include projects like Traitriot, a performance piece where Perera cleverly plays with the various existences of the body – as a bearer of political and symbolic forces, but yet at the same time as a vessel of resistance. The “Passport Blessing Ceremony”, a satirical tongue-in-cheek “modern ritual”, questions the degrading and intrusive processes that certain citizens have come to accept as normal when trying to visit foreign countries while those with “powerful passports” are unaware of these struggles.

Perera frequently collaborates with other creatives on projects. Her collaboration Kesel Maduwa with poet Kumari Kumaragamage is an interpretation of a ritualistic performance inspired by ancient Sri Lankan healing rituals, and the Floating Bottle Project in collaboration with Japanese artist Natsuko Tezuka is a set of three dance pieces by Asian artists who received instructions set inside a bottle which was passed from one artist to another.

Perera’s most recent projects have to do with anonymity and the power dynamics of gaze and the act of looking, exploring the concept of looking at people and being looked at – whether actively or passively – and particularly the male gaze on women. Perera explored the concept in two separate projects: See You, See Me, a performance piece where Perera, draped in a traditional sari and face cover, performed traditionally masculine and feminine poses in photographs and the relaxed positions and movements that are shown in public, and returned the gaze to the audience members.

Perera’s second project to do with gaze and anonymity is “The Roadside Ninja Series”, started after the experience of cycling where Perera cycled around Colombo with her face covered in her “cycling shawl” resembling a ninja, for traffic and pollution-related purposes as well as to avoid men’s gaze and catcalling. Through The Roadside Ninja Series, Perera explored becoming an anonymous onlooker/performer and how it affected her conditioned public behaviour.

Perera shared that 2020 was a year of great transition for her on a personal level, regardless of the pandemic, as she was leaving for the Netherlands to pursue her Master’s in Performing Arts. “Reflecting on my last years as an artist, I started to question making overtly political or provocative work and began to go into the principle of Buddhist philosophy and think about how art can create conditions for connection, compassion, and empathy. My life was in transition already and I was doing a lot of reflecting and reading.”

The pandemic gave Perera the chance to enhance her skills knowledge on different discourses with the increased availability of online courses. It also gave her the chance to work on her relationship with digital mediums. “I spent some time trying out how the body can be transmitted digitally and how to share experiences through the camera.”

While having declined a lot of projects because of her impending move to the Netherlands, Perera did find herself working on creative projects during the pandemic, going on to do her first live online performance for FW: Wall-Floor-Window Positions, an online performance organised by the Taipei Performing Arts Centre as part of ADAM (Asia Discovers Asia Meeting for Contemporary Performance) 2020 online performance/art project (An Internet of Things).

Speaking on her first live online performance, Perera shared that she is still processing how the experience made her feel. “While See You, See Me and The Roadside Ninja (Series) gave me power because I was able to look back at the audience, here I could not see the audience, and I felt more exposed.

“There was also the technological aspect of not knowing if the internet is working or if you’ve moved out of frame while performing. I tried to avoid doing online things during Covid because I feel the exchange of energy that takes place during a live performance is very important. But ultimately, this is a reality now, and we have to see how we can exchange with others using virtual tools and define what aspects we can retain to make art interesting to audiences in this context.”

Another mid-pandemic project Perera worked on was the film Porcelain White, a collaborative performance with Jamaican-born choreographer Zwoisy Mears-Clarke, which unravelled the complications of being Brown/Black persons who embody colonial inheritance. With both Perera and Mears-Clarke being born in former colonies of Britain that maintain certain practices adopted from their former colonial masters, they unravel the complexities and limits of their inherited privilege as they inhabit neocolonial spaces.

In the absence of being able to make the performance together, Mears-Clarke and Perera shot their points of view separately in their own countries, with Perera collaborating with famed director and playwright Arun Welandawe-Prematilleke to direct the film, on a two-day shoot in her ancestral home outside Colombo the weekend lockdown in Sri Lanka was lifted.

Perera’s next performance is due to take place in October when she will be a part of the virtual performance of Multitude of Peer Gynts, a contemporary theatre collaboration of Asian and South Asian performance-makers based off a rereading of Henrik Ibsen’s play Peer Gynt.

Initially meant to be a climactic performance that built off two previous iterations conducted in Indonesia and Japan, Multitudes of Peer Gynts looks into the fourth and fifth acts of the play by Ibsen following a disillusioned Peer Gynt trying to find his way in the world through corrupt business and re-imagining himself in new personas over and over again.

Thematically, the project will explore issues of fear, anxiety, mobility, and immobility, and capture the multiplicity of Asia through different Asian perspectives of multiple Peer Gynts, taking in the artists’ personal stories and identities.

It will take on a modular format in the shape of an interactive website with each artist exploring their own thread and experiences against the backdrop of Peer Gynt. Some will be shooting in their own locations while others will be doing live work.

For her own performance, Perera will be seeing how she can bring in her own practice and create a dialogue with the themes of the Peer Gynt play.

With plans to pursue her Master’s in Performing Arts in the Netherlands, Perera shared the view of looking at also exploring the concept of touch in a post-pandemic society. “Touch has become more taboo than it ever was before; sexualisation aside, it is now a matter of safety to avoid touch. Whereas in my previous work, I was the only one with my face covered, now everyone covers their faces. We are all anonymous and there is the absence of fear of the other.

“With me travelling to a new place and new culture like the Netherlands, where face covers were banned up until Covid subsides, I think it would be interesting to investigate how human connection can be brought back in a non-threatening way and to do a ritual or performance on what it means to gather, collect, and connect in this space where we fear contact.”