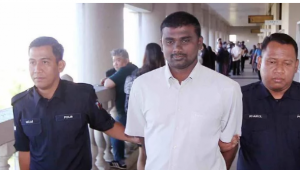 Gadek assemblyman G. Saminathan who was charged with supporting terror group Liberation Tigers of Tamil Eelam (LTTE) has to remain in prison as the High Court dismissed his bail application today, the New Straits Times reported.

A woman believed to be the accused’s wife could not hold back her tears after Judicial Commissioner Datuk Ahmad Shahrir Mohd Salleh delivered his decision in a packed courtroom.

The woman, who was pregnant, cried and hugged Saminathan after the proceedings before she was calmed by her family and friends.

Ahmad Shahrir in his judgment said that Section 13 of the Security Offences (Special Measures) Act 2012 (Sosma) was still in the statute even though it was declared unconstitutional by High Court judge Mohd Nazlan Mohd Ghazali.

“I am bound by Nazlan’s declaration but I have to consider that Section 13 of Sosma is still in the statue,” he said.

On Nov 29, Nazlan declared that Section 13 of Sosma was ultra vires Articles 8 and 121 of the Federal Constitution.

Nazlan in his judgment said the judicial powers or the power to adjudicate in civil or criminal matters were exclusive of the courts.

Ahmad Shahril said LTTE was still gazetted as a terrorist group by the Home Ministry, even though there were claims that it has been disbanded in its origin country, Sri Lanka.

“Our country still gazettes LTTE as a terrorist group and offence of supporting it is punishable under Section 130J of Penal Code which carries life imprisonment.

Counsel Ramkarpal Singh who represented the accused, when met after the proceedings, said they would consider filing an appeal against Ahmad Shahrir’s decision.

“We accept the decision although we are disappointed (with the ruling)… we will consider our next options,” he said.

Saminathan was charged with supporting the LTTE at a function held at Dewan Kasturi Ayer Keroh, Jalan Utama, Taman Ayer Keroh Heights here from 8.30 pm to 10.50 pm on Nov 28, 2018.

He was also charged with possessing items with elements of terrorism or related to the LTTE in a mobile phone at the office of the Unity, Human Resources and Consumer Affairs executive councillor at the Chief Minister’s Department at Kompleks Seri Negeri here at 10.25 am on Oct 10 last year.

On Nov 1, Sessions Court Judge Rozina Ayob ruled that there was merit in the application made by the defence under Section 13(2) of SOSMA to refer constitutional matters concerning bail to the High Court.

The court allowed the applications of Saminathan and 11 other men to refer constitutional issues on bail to the High Court.

They were charged in separate Sessions Courts here and several states on Oct 29 and 31 with allegedly having links with LTTE.

Do not use concoctions on social media against Covid: State Ministry of Indigenous Medicine

May 4, 2021 byMihi Perera No Comments
The State Ministry of Indigenous Medicine Promotion, Rural and Ayurvedic Development and Community Health stated yesterday that the public should not try experimenting with concoctions that are posted