Maliban has become the first biscuit manufacturer in Sri Lanka to source 100% of their ginger from local farmers for their “Inguru Biscuit” brand, according to the company. 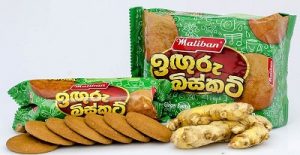 Speaking to The Sunday Morning Business, Maliban Biscuit Manufactories (Pvt.) Ltd. General Manager – Operations Bandula Perera stated that the company first made the decision to source their ginger locally in 2019, and began the initiative during the same year. However, they only started sourcing 100% of the spice from local farmers last May.

“Inguru Biscuit is one of our best performing products and our customers love the taste, which only comes from the finest ginger. Due to this, we decided to source it locally and train our local farmers to harvest only the best-quality ginger.”

Maliban produces 14 million packs of Inguru Biscuit per year and requires up to five tonnes of ginger per month. Perera stated that earlier the company used to import their ginger from countries such as India and China, which was not ideal. Now they source their ginger from 25 farming families based in the areas of Muddaragama, Divulapitiya, Palawela, Midigama, and Naranwala.

This new initiative is handled by Maliban’s dairy and agri products arm, Maliban Dairy and Agri Products (Pvt.) Ltd., which also trains these farmers in the best seed selection, pre-cultivation, and post-cultivation methods, through their experienced field teams who supervise the farmers.

Perera explained that achieving the goal of sourcing their ginger 100% locally came easy to Maliban due to its already existing farmer base of 3,000 farmers, harvesting a variety of crops in a land area of 3,000 acres. The company also sources their corn, green gram, and even soy locally for their cereal product “Yaha Posha”.

Moreover, the company began its own mango plantation in 2018 and more recently started farming pepper on a small scale, with plans of eventually expanding it into areas such as Kolonnawa, Godakawela, and Embilipitiya.

In general, Sri Lanka’s ginger cultivation is spread across the country, with wet and intermediate zones being the main growth areas. The total land extent used for cultivation in 2019 was estimated to be 1,838 hectares, in districts such as Kurunegala, Kandy, Gampaha, Colombo, and Kegalle, with the total production being 13,785 metric tonnes, according to the Department of Export Agriculture.

NiApreneurs to deliver business solutions with purpose and passion

July 1, 2019 bythemorninglk No Comments
NiApreneurs was launched last week in Colombo with the overarching objective of empowering communities through transformative collaborations with socially conscious business partners

June 14, 2021 byNews Admin No Comments
Sri Lanka is expected to become self-sufficient in canned fish within the next six months, following the upcoming establishment of two new canned fish facilities, according to the State Minister of Or