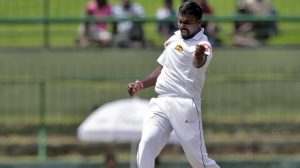 Left-arm spin bowler Malinda Pushpakumara recorded the best-ever bowling figures in a first-class cricket match (in an innings) in Sri Lanka on Sunday, 6 January, picking up all 10 wickets to fall, for 37 runs, in a Premier League Tier ‘A’ match played against Saracens SC in Colombo. Pushpakumara made this remarkable feat playing for CCC.

Pramodya Wickramasinghe held the record earlier when he took 10/41 in 1991 playing for SSC.

Pushpakumara, 31, has been playing first-class cricket since 2006 and has played for Sri Lanka in four tests and two One-day Internationals.