Former Australia captain Mark Taylor has resigned from his position as a Cricket Australia Board director as the bloodletting continues in the wake of the cultural reviews, but said he hoped the purge at the top “stops with me.” 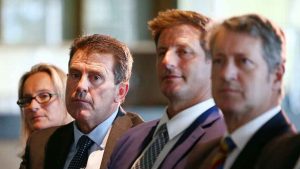 Taylor had been spoken about as a potential successor to David Peever, who was forced to quit as the CA chairman last week, and said his decision had taken a “high degree of soul searching” reflecting on the last 18 months going back to the “toxic” MoU negotiations, and particularly the last six involving the Newlands ball-tampering, becoming increasingly challenging.

Taylor said it “hurt” to see the game in its current state but that he didn’t feel he had anymore to give to the position he had held for 13 years and called on Australian cricket to use the current crisis as a moment to “reset” with specific mention to the strained relationship between CA and the Australia Cricketers’ Association (ACA).

He added that in hindsight, the board AGM, where Peever was re-elected for another term, should have been delayed to allow all parties to read the cultural reviews, although he had been considering his move since before the findings came out and the eventual downfall of Peever following pressure from New South Wales.

“I said many months ago that I thought my next step as a Cricket Australia director was to step up or step off the board,” Taylor said. “I had an opportunity at this time put my name forward as a chairman or to step off, and I think I’ve made the right move in the interests of Australian cricket to step off and give some other, hopefully, former player the chance to add some fresh ideas to this role.

“Over the last 13 years, particularly the last 18 months, there has been a lot in this role and it has taken its toll. Over the last two weeks even more so, and I’ve got to the stage where I don’t think I can give anymore. I’ve lost the energy.”

Taylor was talked into continuing as a board director when his latest four-year term finished last September, a time following the messy and acrimonious MoU discussions which brought the men’s Test team to the brink of striking. “I was so disappointed with myself that I didn’t do more and with the world of Australian cricket, I said I’m going to try and fix this. I did say I’d do one more term, but year-by-year,” Taylor said.

His resignation letter to Earl Eddings, the interim chairman of CA, further reflected on the breakdown between CA and the ACA.

“Following on from the events in March this year that rocked the cricketing world, and the ongoing damage this created for our game, including vital employer-employee relationships, my principle brief has been to work hard at fostering and restoring a workable, meaningful and respectful understanding between Cricket Australia and the Australian Cricketers’ Association, especially at a time both parties were still recovering from the prolonged spirited, vigorous and, sometimes, toxic MoU negotiations dating back to mid-2017,” Taylor wrote.

“As Australian cricket faces up to its latest challenge, the time therefore has arrived for me to step back and allow Cricket Australia and the ACA to work from a fresh page in restoring the important values that have enabled Australia, for many years, to be recognised as one of the world’s most admired and successful cricket nations.”

Taylor also spoke about his continued role in the media bringing increasing conflicts of interest for him although that had been a dual role he held throughout his time in administration. When asked about those he saw as potential successors to his position, he name-checked Alex Blackwell, currently on the board of NSW, former women’s captain Belinda Clark, who works for CA, and former Test batsman Simon Katich.

“One thing that has happened with the change of broadcasters is that my role at Channel 9 has changed, I’m still a broadcaster but very loosely a reporter which means I have to give my opinion a lot more on what’s happening in the world of CA. That’s made my job even harder.

“There are now two positions available on the CA board and I feel sorry that I have left [Earl Eddings] with two voids to fill. I think it is a great opportunity for a reset in Australian cricket, to make that change everyone talks about. With our men’s team struggling, it’s a chance for all of us to change for the good and work out how we can all work together for the good of Australian cricket.”

Not Just Sports: Take a look at “Olinda Keliya”!

September 19, 2021 byRevatha No Comments
Our weekly feature, Not Just Sports