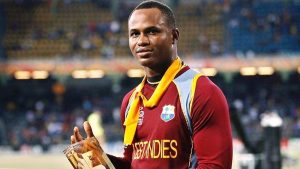 Marlon Nathaniel Samuels, born in 1981, is a former Jamaican cricketer who played internationally for the West Indies in all three formats, and a former ODI Captain too

The International Cricket Council (ICC), on behalf of the Emirates Cricket Board (ECB), has charged former West Indies player Marlon Samuels with breaching four counts of the ECB Anti-Corruption Code for Participants of the T10 League.

Samuels has been charged with the following offences under the Code:

* A breach of Article 2.4.2 – Failing to disclose to the Designated Anti-Corruption Official, the receipt of any gift, payment, hospitality or other benefit that was made or given in circumstances that could bring the Participant or the sport of cricket into disrepute.

* A breach of Article 2.4.3 – Failing to disclose to the Designated Anti-Corruption Official receipt of hospitality with a value of US $750 or more.

* Breaches of Article 2.4.6 – Failing to cooperate with the Designated Anti-Corruption Official’s investigation.

* Breaches of Article 2.4.7 – Obstructing or delaying the Designated Anti-Corruption Official’s investigation by concealing information that may have been relevant to the investigation.

Samuels has 14 days from 21 September to respond to the charges. The ICC will not make any further comment in respect of these charges at this stage.

October 17, 2018 byRevatha No Comments
"Given that the next event on the ICC calendar is the ICC Women's WT20 ... it is recommended that the ICC policies are put in place, if at all possible, in advance of the start of this event."