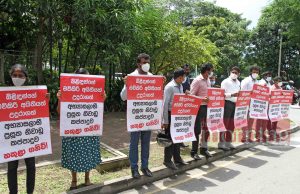 CDOC Secretary Dhammika Munasinghe said that while on average a government or private sector employee is entitled to 84 days of paid maternity leave, the number of graduates newly recruited as development officers has been reduced to 42 days.

He told The Morning that they had already lodged a complaint with the Human Rights Commission of Sri Lanka (HRCSL) regarding the curtailment of the maternity leave of public servants.

Meanwhile, a protest was also held yesterday by the CDOC in front of the Ministry of Public Service, Provincial Councils, and Local Government, demanding the withdrawal of the government decision.

Munasinghe said the protest would continue until their request is granted.

All issues faced by people are national issues: Opposition Leader

January 18, 2021 byRusiru Keppetipola No Comments
Opposition Leader Sajith Premadasa stated that as the Opposition Leader, he considers every issue faced by the public a national issue.