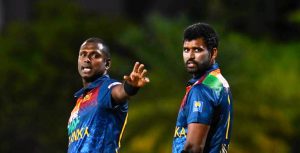 “That news is completely false. I saw some social media posts that are being shared carrying such thing. Some people might be trying to make such a story. But there no truth in it,” Mathews told the Morning Sports yesterday (3) after the completion of the Pallekele Test which he played in and Sri Lanka won by 209 runs.

Perera announced his retirement from international cricket too yesterday. The Morning Sports understood that Perera was supposed to meet the National Selection Committee to discuss his future plans on Thursday (6) yet the all-rounder had unexpectedly made the announcement yesterday. 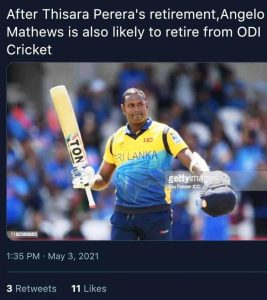 “I have no plans to retire because anyone else wants me to retire. I will retire the day which I want to retire. That is on my own decision, not on anyone else’s decision,” Mathews further stressed.