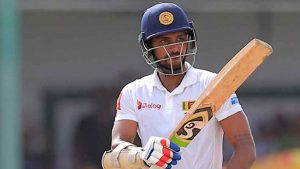 Danushka Gunathilaka raises his bat after bringing up a fifty

Danushka Gunathilaka found form with a dominant display at the top of the order, while Angelo Mathews and Kusal Mendis were also among the runs, as the three-day warm-up match against New Zealand XI petered to a draw in Napier.

Gunathilaka’s rapid second innings 77-ball 83, inclusive of 12 boundaries and a six, was a timely knock for a player looking to regain the trust of the SLC leadership, after having been suspended twice over the last year for violating team curfew and protocols. In his absence, Sri Lanka have struggled to find a partner for newly-appointed vice captain Dimuth Karunaratne at the top of the order, and they will now be hopeful that the left-hander can nail down a permanent spot – provided he steers clear of any further disciplinary issues.

Gunathilaka’s return to the national fold however only addresses part of Sri Lanka’s batting woes, as their all too common tendency to lose wickets in batches was on full display early on in the match, even against what was essentially a developmental New Zealand outfit.

Gunathilaka was among five Sri Lankan batsmen to be dismissed for ducks on the opening day, as the visitors slumped to 88-8, before an unbeaten 128 off 177 balls from Angelo Mathews bailed them out, as Sri Lanka limped to 210 for 9 before declaring.

Sri Lanka’s bowlers meanwhile got a good time out as the home side played out 82 overs and declared on 270/8 in their response. The Lankan seam quartet of Kasun Rajitha, Suranga Lakmal, Lahiru Kumara, and Dushmantha Chameera, unsurprisingly, shouldered a majority of the workload, ahead of what is likely to be a much greener surface at the Basin Reserve during Saturday’s first Test.

While the quicks made early inroads, they largely toiled in vain over the course of the game, picking up just the five wickets among them in the match. Spinners Dilruwan Perera and Lakshan Sandakan meanwhile picked up two wickets apiece, while Mathews bowled three tidy overs of seam, which bodes well for a side lacking any true allrounders.

In their second stint in the middle Sri Lanka’s batsmen performed much better, as, alongside Gunathilaka, Kusal Mendis made an unbeaten 105-ball 72 before retiring, while the returning Lahiru Thirimanne also made a steady 45 in a 116-run opening stand. The runs for Mendis in particular will be heartening for Sri Lanka as he, along with Mathews and Dinesh Chandimal, will likely make the core of Sri Lanka’s middle order.

Sri Lanka eventually declared their second innings on 321 for 5 and set a target of 262. The home side were on 139/2 before both sides agreed to call off play on the final day midway through the 29th over.

August 14, 2018 byMalik No Comments
Sri Lanka ended South Africa's tour of the island as they started it: by strangling their visitors with spin to win the only T20I in front of a sell-out crowd.

November 29, 2019 byTSM Web Desk No Comments
Assie captain Tim Paine insists that it will take an awful lot for him ever to send an opposition side into bat after twice seeing his men struggle against Eng. when he did so at Lord's and The Oval.