Mathews recalled for Tests: Can he be part of the final SL Test XI? 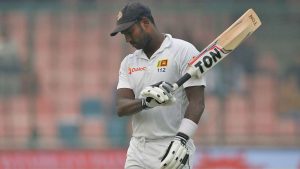 Who’s to be dropped for veteran bat Angelo Mathews to be included in the SL final XI?

Angelo Mathews, who left the Sri Lanka squad to return to the country midway of the West Indies series last month to attend a personal family matter, has been recalled to the Sri Lanka squad for the two-Test series against touring Bangladesh, starting on 21 April in Pallekele.

But the real question is where can Mathews bat in the current Sri Lanka Test team?

That will be an intricate issue now at the hands of the newly-appointed National Selection Committee, headed by Pramodya Wickramasinghe. His committee comprises Hemantha Wickramaratne and Romesh Kaluwitharana in senior national selections. The others in the current committee are Uvais Karnain, Waruna Waragoda, and Thilaka Gunaratne.

During the previous two-match West Indies Tests, that ended in 0-0 draw, Sri Lanka’s entire top and middle order batting were seen coming back to form.

Who is to be dropped from the above seven in the final playing XI against the Bangladeshis so that Mathews can return to the side? An interesting yet tricky problem before Wickramasinghe & Co.

December 11, 2020 byRevatha No Comments
After Diego Maradona, the Argentine hero who lifted the Cup in 1986, Italian hero Rossi joins him following long illness

October 13, 2019 byThe Sunday Morning No Comments
Former Sri Lanka Cricket (SLC) Manager Asanka Gurusinha, who left his job at SLC last August, revealed to The Sunday Morning Sports that he was “disappointed” because he was not allowed to perform