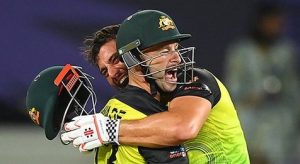 Matthew Wade (on right) and Marcus Stoinis guided Aussies for an unlikely victory with an 81-run unfinished stand for the sixth wicket. Photo ICC

Australia stunned the rollicking Pakistan beating them by five wickets with one over to spare in the second T20 World Cup semi-finals yesterday (11) in Dubai and booked the last remaining berth in the Sunday’s final with neighbouring rivals New Zealand.

Chasing a challenging 177 runs to win, Australia’s No. 7 bat Matthew Wade turned the game the Aussies’ way with a scintillating 41 off 17 balls, finishing off the game with three consecutive sixes as they needed 18 runs to seal the win. 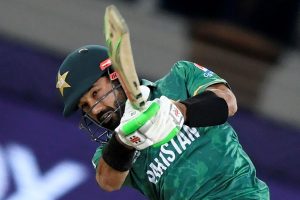 Mohammed Rizwan on his way to his 67 yesterday (11)

Wade and Marcus Stoinis guided the Aussies for the once unlikely victory with an 81-run unfinished stand for the sixth wicket in six overs and four balls.

The manner in which Wade finished the match after he was dropped near the line just before the finish by Hasan Ali, with three straight consecutive sixes off Shaheen Afridi in the penultimate over, would have broken the hearts of the ardent Pakistani fans world over who expected the country to go into finals undefeated this time.

The two Pakistani openers, Mohammed Rizwan and Skipper Babar Azam, earlier shared 71 runs off the first ten over. The two were always expected to click for the Pakistanis in the crunch game.

Rizwan continued the onslaught after Azam departed, caught off Adam Zampa, sharing another 72 runs with Fakhar Zaman. The contributions from the top three were enough for them to put the sizeable 176 on the board.

Player of the Match: Matthew Wade

Qatar F1 race to be held in November

October 2, 2021 byRevatha No Comments
Qatar will make its F1 debut with a race in November

January 27, 2021 byRevatha No Comments
Chandimal falling in the very next delivery after "harmless sledge"