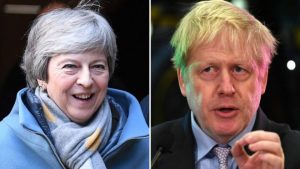 Theresa May is being urged to secure changes from the EU to the Northern Irish backstop as part of her Brexit deal to get it past parliament.

MPs on Tuesday will vote on a series of amendments to the PM’s plans that could shape the future direction of Brexit.

But the Irish deputy PM says changes to the backstop – aimed at preventing a hard border – would not be acceptable.

The backstop plan – a fallback position to avoid the return of customs checks at the Irish border if the UK fails to agree a deal with the EU – is a major sticking point for opponents of Mrs May’s withdrawal agreement.

It has proved unpopular with many Brexit-supporting Conservative MPs who are concerned that it could tie the UK to many EU rules indefinitely.

After May’s deal was rejected in the Commons on 15 January by 432 votes to 202, opposition and backbench MP’s have been tabling amendments to the plans.

While MPs will not deliver their final verdict on the deal on Tuesday, they will vote on the amendments.

One that has the backing of senior Tory Sir Graham Brady, the chairman of the backbench 1922 Committee, calls for the backstop to be replaced by “alternative arrangements”.

Speaking on BBC Radio 4’s Westminster Hour, Sir Graham said it was the “kind of compromise forward that can actually attract the support of a majority in the house of Commons – I hope it will and demonstrate in terms to the EU there is a way forward for the withdrawal agreement.”

Brexiteers say if the non-binding amendment is passed it will give the PM more leeway to win concessions from the EU.

Writing in the Daily Telegraph, Johnson suggested May could get the EU to change the text of her agreement to include an expiry date for the backstop, or include a mechanism allowing the UK to unilaterally withdraw from it.

Johnson said: “If the PM secures that change – a proper UK-sized perforation in the fabric of the backstop itself – I have no doubt that she will have the whole country full-throatedly behind her.”

Reiterating earlier comments that the EU would not ratify a deal without the backstop being included, the Irish Republic’s deputy prime minister and foreign minister Simon Coveney said: “Even in a no-deal Brexit situation every party and every MP in the UK will have a responsibility to ensure there is no return to a hard border and Northern Ireland is protected.”

He added: “The EU has been clear that the backstop is an integral part of the withdrawal agreement.” (BBC)

September 4, 2019 byTSM Web Desk No Comments
Tory rebels and opposition MPs have defeated the government in the first stage of their attempt to pass a law designed to prevent a no-deal Brexit.

India-China clash: Two sides blame each other for deadly fighting

June 17, 2020 byTSM Web Desk No Comments
China and India have accused each other of provoking fighting in which at least 20 Indian soldiers were killed in a disputed Himalayan border area.