The much awaited MCA ‘B’ Division 50-over League Tournament, conducted by the Mercantile Cricket Association, will commence from next Wednesday, 26 September at the MCA Grounds, Colombo.

This was announced to the media at a special briefing held at MCA premises on Wednesday, 19 September.

Owning the title sponsorship for the second year running, Unilever Fair & Lovely Men will award the coveted ‘Fair & Lovely Men Challenge Trophy’ to the eight teams who will compete against their opponents for the grand championship. 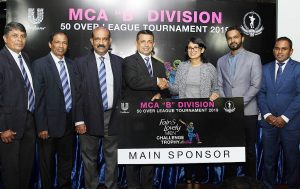 They will face one another in 33 matches during the Preliminaries, to be held from 26 September.

The top four teams will qualify to play in the semi-finals from 20 October.

The final will take place on 3 November at the Mercantile Cricket Association Grounds.

“We are very pleased to be partnering with Unilever Sri Lanka for the second consecutive year for the ‘B’ Division tournament. This tournament attracts a lot of potential players and is a great platform to witness the raise of the next generation of players who will keep this proud game alive,” said MCA President, Roshan Iddamalgoda.

Face Care brand, ‘Fair & Lovely Men’, announced the ‘FAL Men Cricket Academy’ this year. The objective of this initiative, made together with thepapare.com, is to identify young potential talent from around the country.

“Cricket in Sri Lanka has changed lives, empowered a Nation and continues to be the most cherished sport. Despite the success and the talent this country boasts for the sport, our young cricketers have found it hard to find their places amongst the best in the international arena. This has been due to the gaps in the transition from domestic to international cricket. Therefore, the FAL Men Cricket Academy will be launched with the right infrastructure to develop a new breed of cricketers that will evolve into great sportsman and raise the bar for Sri Lankan cricket,” said Senior Brand Manager Unilever Face Care, Daminda Perera.

“Also, with our affiliation to the MCA ‘B’ Division League, we will support emerging Sri Lankan cricketers to set new standards in the game and play the game to their true potential,” he further noted.

In addition to identifying potential talent, the Academy will support the development of talent under all three categories (‘A’, ‘B’ & ‘C’) and provide educational support for those selected groups. To provide a wider opportunity for youngsters to display their talents, four major coaching camps will take place in Colombo, Kandy, Galle and Jaffna and will be headed by some of Sri Lanka’s top class premier players.

Further, to provide best in-class cricket learning, the Academy will host a ‘Cricket Masterclass’ which will focus on teaching different areas of cricket (i.e. batting, bowling and fielding master class), personality and leadership coaching as well as various other values essential to becoming a well-rounded cricketer as well as a citizen.

The entire platform will be made available to a wider audience through inter-linked thepapare.com and FAL Men digital platforms.

November 22, 2018 byRevatha No Comments
The third Test between England and Sri Lanka starts on Friday at the SSC in Colombo.

106TH OR 99TH – ISN’T IT TIME TO PUT THE TENNIS NATIONALS’ RECORD STRAIGHT?

December 21, 2021 byRevatha No Comments
Focusing on key issue: How many Tennis Nationals has Sri Lanka held so far?