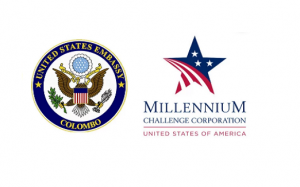 The U.S. Embassy today said that the Millennium Challenge Corporation(MCC) grant agreement once signed has to be submitted to parliament for approval according to MCC’s worldwide policy.

“Once the grant assistance agreement is signed, the Government of Sri Lanka will send it to parliament for approval,”U.S. Embassy said in a press statement.

The U.S. Embassy noted that Parliamentary review and approval were required by MCC to ensure the grant assistance agreement has the support of the government and the people.

The U.S. Embassy said once the agreement was submitted to Parliament, the Parliament will have ample opportunity to review the grant assistance agreement.

“During that review period, the Government of Sri Lanka will develop plans to implement the grant assistance agreement and design projects to improve transportation and land administration. ”

On the 29th of October, Finance Minister Mangala Samaraweera said the $ 480 Million MCC grant had been approved by the cabinet.

Prime Minister Ranil Wickremesinghe told media the following day that the MCC agreement will be signed before the presidential elections set to be held on the 16 Nov.

However, Opposition Leader Mahinda Rajapaksa yesterday issuing a press statement said the contents of the MCC agreement were unknown and that the agreement should not be signed before the polls.

Leave of all prison employees cancelled

November 15, 2020 byLahiru Pothmulla No Comments
Leave of all prison employees have been cancelled with immediate effect and they have been requested to report duty by 8 am tomorrow, Prisons Commissioner General Thushara Upuldeniya said today.

December 25, 2021 byAazam Ameen No Comments
The Central Bank of Sri Lanka (CBSL) says it has decided to extend the payment of an additional Rs. 10.00 per US dollar for worker remittances channeled through licensed banks and other formal channel