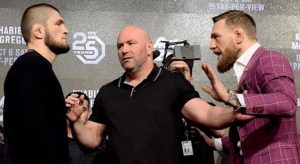 Conor McGregor says he will beat Khabib Nurmagomedov by “devastating knockout” in his comeback UFC fight in Las Vegas on Saturday.

McGregor will return to the octagon for the first time in almost two years when he fights Russia’s undefeated UFC lightweight champion Nurmagomedov in UFC 229.

“I will clatter him; he will crumble. I don’t think he can take a smack. He reacts like a novice.”

McGregor’s last appearance in UFC came in November 2016 when he beat Eddie Alvarez to add the lightweight belt to his featherweight title.

He was later stripped of both titles because of inactivity, with Nurmagomedov being installed as lightweight champion earlier this year – a decision that still grates with McGregor.

In an earlier interview with TheMacLife.com, he said he “fell out of love with the game” but was now “more hungry” as he returns to the octagon.

“I spent my entire life’s work to win those two UFC titles,” he said.

“I sacrificed so much to gain those world titles and then as soon as I win the second world title – I hadn’t even been offered a featherweight contest – and the featherweight title was taken off me.

“Many things irritated me in the game and just watching it all unfold, I just became a lot more hungry to come back and show who the real king is.

“I fell out of love with the game for a bit, went off and did my own thing, had many things going on and now I’m back. I’m hungry to compete and we’re here right on the cusp of it.”