The Media Organizations Collective today (07) released a statement expressing their deep dissatisfaction about the comments made by Deputy Director General of Health Services Dr Hemantha Herath regarding journalists who were killed due to the execution of their duties.

The controversial statement made by Herath referred to the killed journalists as “third class journalists”.

The Media Organizations Collective stated that this is a grave insult to all journalists and that those who were killed had to pay with their life for doing their jobs with passion.

They also stated that Herath was shedding light on a topic that was not his concern during a media conference held on 03 June, where he made the worrying remarks.

“The Deputy Director General should deliver a public apology for the statement that was insulting to all journalists striving to report the truth about the decisions taken in the country,” the Media Organizations Collective said. 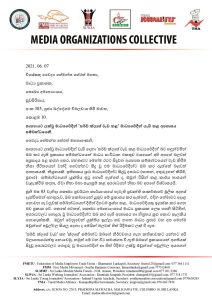 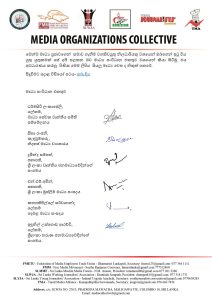 April 26, 2021 byAazam Ameen No Comments
A special discussion between the Opposition MPs and Catholic Fathers took place today (26) on the subject of the Easter Sunday investigations.

February 27, 2021 byLahiru Pothmulla No Comments
The Asian Infrastructure Investment Bank (AIIB) has approved USD 180 million loan for the Covid-19 emergency and crisis response facility to be disbursed through the Bank of Ceylon (USD 90 million) an