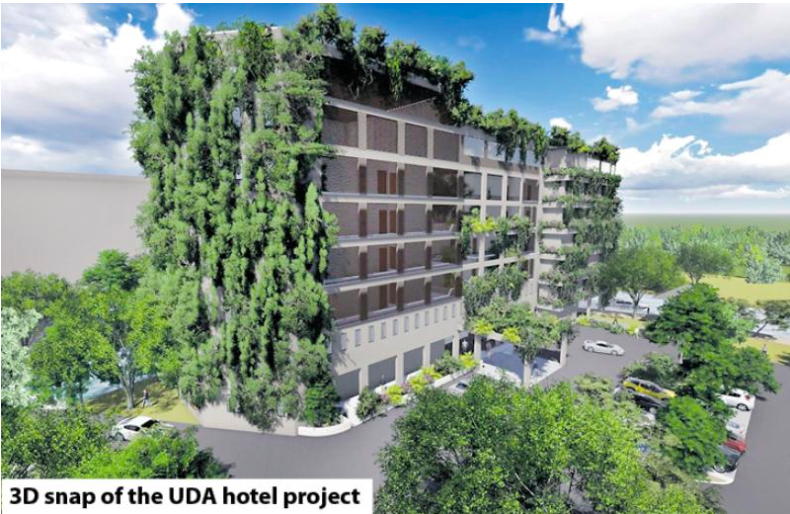 Massive irregularities in the luxury boutique hotel project at Waters Edge, a fully owned subsidiary company of the Urban Development Authority (UDA), have been uncovered by the Special Investigation Unit of the National Audit Office (NAO) recently.

The Sunday Morning learnt that the project proposal submitted by then Megapolis and Western Development Minister Patali Champika Ranawaka to build a 48-room luxury boutique hotel at Waters Edge at an estimated cost of Rs. 1.2 billion, which has been approved by the Cabinet of Ministers subject to the observations given by the Ministry of Finance, has now been temporarily suspended due to the non-availability of funds for the construction of the project.

It is further learnt that the project had been launched without following necessary procedures and the financial facilities for the construction of the luxury project.

Special attention was also paid to the commencement of the construction at a time when the tourism industry was severely affected due to the Easter Sunday terror attacks last year.

As of now, the project has been temporarily suspended since January this year due to the non-availability of funds, despite millions of rupees already being paid to the construction agency and for project consultants.

Assurances on not using Treasury funds

The NAO has revealed that on 26 January 2016, the land situated at Waters Edge in Battaramulla was transferred to Waters Edge Ltd. by Sunken (Pvt.) Ltd. with the blessings of the then Cabinet.

On 24 April 2018, Cabinet approval was granted for the construction of the 48-room luxury boutique hotel under the condition that the funds of the UDA or Treasury would not be used for the new hotel’s construction.

Furthermore, on 29 March 2019, approval was once again received by the Ministry that the funds of the Treasury would not be used for the construction.

Nevertheless, on 27 August 2019, permission was granted for the development of the hotel by the UDA.

Investigations have further uncovered that four agreements worth Rs. 31.3 million have been signed to obtain consultation services, and by last November, Rs. 15.1 million had already been dispersed accordingly.

Furthermore, it has also been revealed that a request has been made on 11 March 2019 from the Bank of Ceylon (BOC) Nugegoda Branch to obtain Rs. 1.3 billion for the construction of the building.

In a letter written to the Secretary to the Ministry of Urban Development, Water Supply, and Housing Facilities, the NAO has stated that as per the lease agreement signed between the two parties to lease out the land situated in Battaramulla, the UDA and Waters Edge Ltd. should pay a sum of Rs. 43.4 million per year from 2024.

The investigations also revealed that the procurement process for the project had been launched even before the availability of funding and the methods had been finalised.

By violating Government Circular No. PED 12, 9, new appointments had been made by Waters Edge Ltd. while creating new positions on 16 September 2019 and 1 April 2019. Accordingly, a new Project Director and Project Manager had been appointed, respectively.

The construction work was launched in September 2019.

However, on 2 October 2019, a sum of Rs. 108 million was approved and paid on the same day by the Project Consultant as an advance payment to the constructor for the commencement of work.

In addition, an application was made on 23 December 2019 to obtain Rs. 71 million as the second tranche of the funds, but the funds had not been transferred due to the unavailability of funds in the accounts.

The project has temporarily been suspended from 6 January 2020 as it had commenced without a proper financial or funding assessment.

Despite this, Cabinet approval was granted under the condition that the project would be continued without being a burden to the Treasury and without obtaining any funds from the Treasury. However, a request to obtain Rs. 1.3 billion in loans had been made from the BOC Nugegoda Branch by violating Government Circular No. 12, 8.1.5.

It has been further revealed that the loan assessment for obtaining the requested amount had also not been completed and the project had been launched by exceeding the authorised limitations.

The NAO also highlighted that a proper evaluation had not been conducted prior to launching the project, taking into account the negative impacts as a result of the collapse of the tourism industry due to the Easter Sunday terror attacks last year.

A proper financial assessment has also not been conducted, despite the fact that the project received Rs. 150 million in operational profits and also considering the requirement of paying Rs. 43 million per year as per the lease agreement.

The construction company has also demanded charges from the company for commencing the construction work without having proper funds for the project, the investigation revealed.

Responding to the audit query findings of the NAO, former Megapolis and Western Development Minister Patali Champika Ranawaka claimed that the project was launched after completing all necessary assessments that were required and there was no issue with the finances of the UDA by the time it was handed over to the new Government.

“We have developed Waters Edge into a company which is earning huge profits and only out of those profits was the project to be completed,” he stressed.

When queried about the suspension of the project, the former Minister stressed that the project was suspended because the Government did not have money to carry it out.

“I challenge the present administration to compare the income earned by the UDA in 2019 and this year. We have earned profits and now they can’t continue the projects without having enough funds,” he stressed.

June 4, 2021 byAazam Ameen No Comments
Shmuel Yoskovitz, the CEO of X-Press Feeders, the company which operated the ill-fated MV X-Press Pearl, has expressed apologies for the impact that the recent incident has caused.