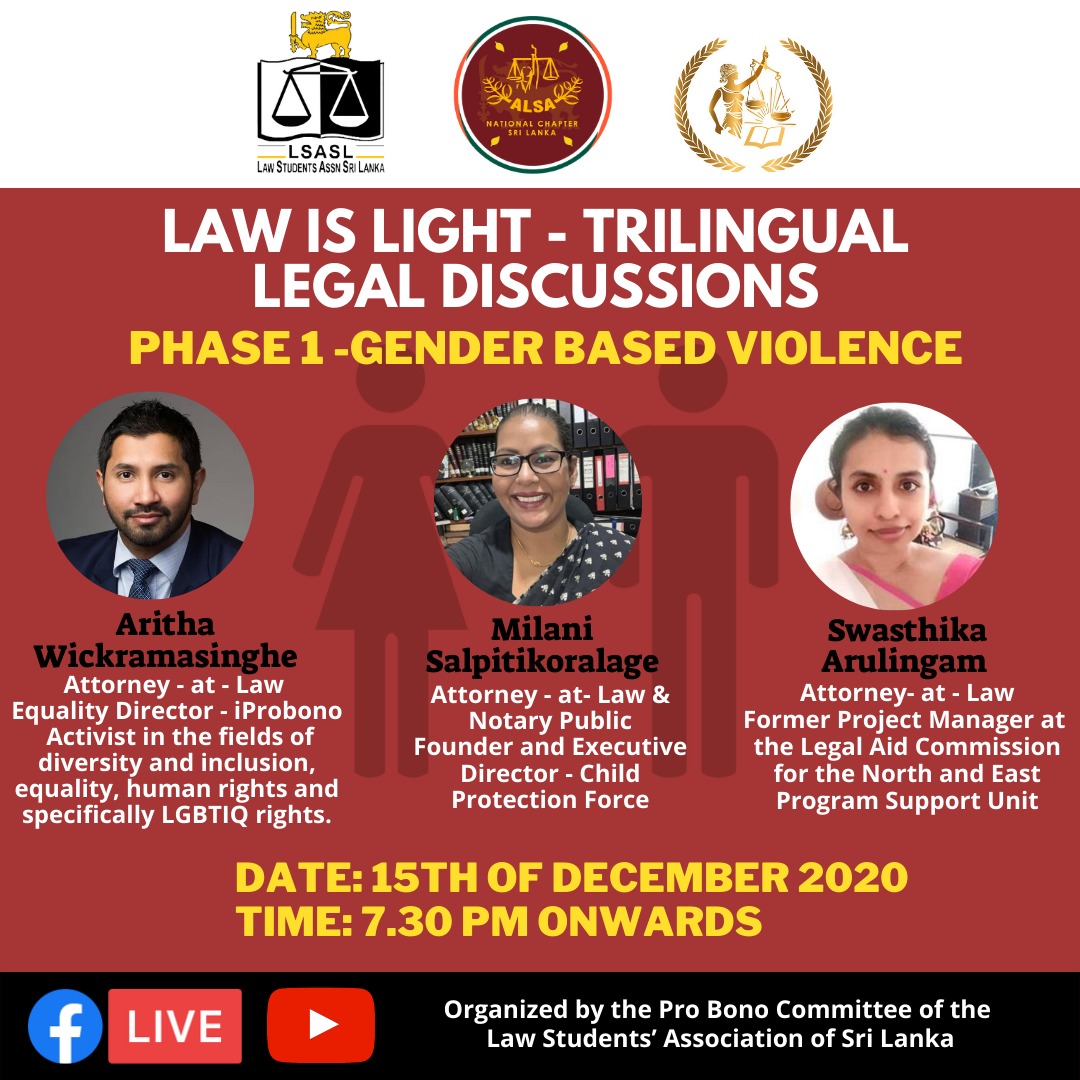 ‘Men must take responsibility for GBV’

The first in this series was a discussion on Gender Based Violence with three panellists. One was Aritha Wickramasinghe, the Attorney at Law and Equality Director at iProbono. He leads the organisation’s LGBT access to justice work, has been a pioneering activist in the field of diversity and inclusion and has spearheaded a number of initiatives and pro bono projects promoting diversity, equality, and human rights – specifically LGBT rights – internationally.

The other two panellists were Attorney at Law Wasana Kannangara, a Legal Officer of Child Protection Force, and Attorney at Law Swasthika Arulingam, a former project manager at the legal aid commission for the North and East Programme Support Unit.

What is gender based violence (GBV) and what are the types of GBV? Who can cause GBV and where can it happen?

Aritha: The term GBV is gender-neutral; it means actions of physical and emotional violence against someone. There is overwhelming violence against women. A recent government survey reveals that one-fifth of women are victims of physical and sexual violence. A UNFPA report stated that 95% of women who use public transport are victims of sexual harassment.

For a long time, men have denied their role as a perpetrator of this violence and they are increasingly being called out now. Looking at the statistics, if 95% of women experience sexual harassment in public transport, then there has to be a majority of men who are responsible for this type of violence happening.

We have to take responsibility as a gender and there needs to be more accountability. There isn’t enough accountability. If you take rape as an example, only one person was convicted of rape in Sri Lanka last year, and this is in light of about 6,000 reported cases.

Swasthika: GBV can happen at the workplace and any public place. Violence can take place on a physical, sexual and mental level. The general advice given to girls is “Don’t go out in the night, it is not safe”, but we fail to recognise that women face violence at home from their family members and intimate partners. This is not discussed in the open. Further, women don’t report violence that happens at work due to the fear of losing the job. In my view, GBV is most probable to happen in private spaces.

Aritha: Violence can be physical, emotional and financial. This revolves around the level of control a person can have over another.

Wasana: If a touch can cause you to feel threatened for life, it can amount to physical violence. It is all about exerting power over an individual; this can happen within a married couple, and even out of marriage, where a man forces a woman to have sexual intercourse. Women have the right to have protected sex. If a person denies this right, it can amount to sexual violence.

Emotional violence is a series of events causing psychological harm or suffering to the victim. It is a behavioural and verbal form of abuse, and it usually takes place in prolonged periods. The victim may feel a high sense of insecurity and depression. The victim may also be emotionally drained, abused, and harassed. Screaming at your partner, using bad language as a form of insult, and threatening to harm your partner are forms of emotional abuse. Financial abuse is when one has control over financial resources by blocking accounts and denying access to the money.

Who can cause this violence?

Aritha: Some women who took part in the survey thought that they deserved that treatment, and they did not think it was a form of abuse. They did not think that there was something wrong. The patriarchal system is very strong, and women are a part of it. It will take a while to dismantle this notion, but it is a struggle that women must lead together with men.

Swasthika: When an individual experiences violence as a child, they tend to do the same as adults. This is called generational violence. However, this is not only because of violence. When children are influenced by social opinions, they tend to objectify women and the LGBQT community, and turn into adults who cause violence.

What do you think of bullying? Is bullying part of GBV?

Aritha: Bullying and harassment are part of GBV. When someone is being bullied, they feel threatened for their emotional and physical wellbeing. When the bully is of an opposite gender, it does come under GBV.

How do men face sexual violence?

Aritha: We see sexual violence committed by women on men, more often where there is a power play, where the female is in a position of power, or has responsibility of the male child. Most of the sexual violence experience by men have been committed by other men. Many male victims don’t come out and talk about it due to the stigma attached to it.

We are made to think that it is feminine to admit that a horrendous crime has been committed against us. There is a lot of shame and we are told to man up. These toxic values of masculinity mean that when we become victims, we don’t tend to speak up and then unfortunately, we become the perpetrators of sexual violence.

Swasthika: We see men bullying men by insulting their masculinity. This is a form of violence which boys face. We don’t see any man complaining about the violence committed by women, due to the cultural stigma it is embedded around. There is an assumption that rape can be done only by a man and this is reflected in our laws even today. Hence, men don’t come forward.

How do you suggest we combat this issue and encourage men to speak up?

Aritha: Education in school. We all know, most of us did not receive any form of sexual education in school, or relationship education. We are not taught what consent means. A lot of men and women do not understand the word consent.

Children are learning about relationships through pornography, and a lot of pornographic content is violent, but they are playing out certain fantasies. For a young child who hasn’t been taught consent or decent relationships, seeing this as a normalisation of sexual and gender-based behaviour influences how they treat their partner. The lack of education perpetuates violence against women.

Is there a difference between domestic violence and gender based violence? Or is it the same?

Aritha: They are not the same. The contexts are different. GBV can happen anywhere. It can happen on the bus, or at the beach. Domestic violence happens in a private space within a private relationship. It is not necessarily at home, but it happens between intimate partners.

There is a stigma attached to reporting your spouse for any violence inflicted. What advice would you give these people?

Aritha: As a lawyer, I would say that you should report it, but we need to understand that the circumstances of every person are very different. We also need some very sympathetic police, because there are instances where women who went to complain have been sent back.

The Police have pushed partners in abusive relationships to mediation to solve their issues, as opposed to taking any form of legal action. Any form of domestic violence is a criminal matter. The fact that it happened between intimate partners doesn’t reduce its criminality.

Can you speak on the violence faced by the LGBTIQ community in Sri Lanka?

What is the legal framework in place to tackle this issue?

We live in a digital world today. Can you elaborate on sexual violence that happens on the Internet?

We see the school playground bullying taking place on social media like naming and shaming individuals, calling them by insulting words or sending violent or shaming messages. We see a lot of sexual cyber harassment going on. There are actually organised gangs of school boys, unfortunately who run very sophisticated rings, sharing naked images of school girls.

The writers are members of the Pro Bono Committee of the Law Students’ Association of Sri Lanka.

December 24, 2020 byLahiru Pothmulla No Comments
The construction of the Marine Drive section adjacent to the US Embassy in Kollupitiya would be resumed in January next year as security concerns have been resolved, Highways Minister Johnston Fernand

Protesters vacate the vicinity of the Bandaranayake statue

July 21, 2022 byRuwani Fonseka No Comments
Aragalaya protesters have vacated the vicinity of the Bandaranayake statue in Fort after a court order was issued yesterday (20) stating that no one can gather within a 50 meter radius around the stat