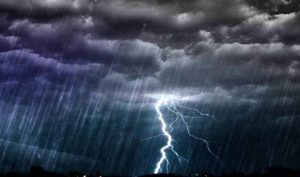 The Department of Meteorology has warned of severe lightning and thundershowers in some parts of the Island today.

The Department said, thundershowers accompanied by severe lightning are likely to occur in several places of the Western, Sabaragamuwa provinces, Galle and Matara districts during the evening or night.

“Fairly heavy showers about 50-75mm are likely at some places,” Department of Meteorology said.

The Department of Meteorology advises the public to;

Israel-Palestine conflict: ‘No threat to safety of Lankans there’

May 23, 2021 byNews Admin No Comments
There is no threat to the safety and security of Sri Lankans living in areas of Israel and Palestine and there have been no complaints received so far by the Sri Lanka Bureau of Foreign Employment (SL

Damage to Buddha statue: Could be extremism, Public Security Ministry

January 1, 2021 byNethmi Liyanapathirana No Comments
The damage caused to the glass cover of a Buddha statue in the Hingula area in Mawanella this week could be an act of extremism, according to the Ministry of Public Security.