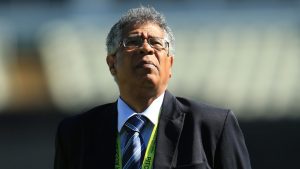 Former Sri Lanka cricket team manager and stalwart of the Singhalese Sports Club (SSC) Michael De Zoysa passed away at the age of 73 in Colombo on Sunday, 29 October.

De Zoysa is known for giving helping hand in the development of many young cricketers at SSC who went on to represent Sri Lanka. De Zoysa also headed the Advisory Committee of Sri Lanka Cricket (SLC) until early this year.

A media release by SLC said the following:

Sri Lanka Cricket is saddened by the demise of Mr. Michael de Zoyza, the former Manager of the ‘National Cricket Team’.

“Michael was a great man with a good character and had a proactive mindset. The cricketing fraternity will immensely miss his presence,” De Silva added.

As a mark of respect to its former manager, the National Team will wear a ‘Black Arm Band’ when they take the field this (Monday) evening to play the second ODI vs Pakistan.

Mr. Zoyza also has functioned as an Executive Committee Member of the SLC and has held several other honorary positions in the game’s administration.

September 3, 2018 byRevatha No Comments
Alastair Cook has announced he will retire from international cricket after the Oval Test against India