Mickey Arthur set to be appointed as SL head coach 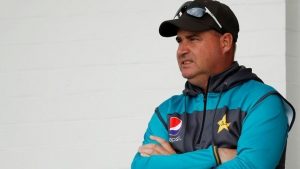 Mickey Arthur, who has previously coached South Africa, Australia and Pakistan, is set to take up the next assignment in his coaching career, as head coach of Sri Lanka, ahead of their upcoming two-Test series in Pakistan.

According to a report on ESPNcricinfo, Grant Flower will join the set-up as the batting coach, while David Saker and Shane McDermott will take over as bowling and fielding coach respectively. Sri Lanka Cricket has agreed to a two-year contract with the new staff, although Flower will only work with the limited overs team and won’t travel to Pakistan for the Test series beginning 11 December.

Arthur is one of the most experienced coaches around, having being involved with three international teams for a significant period. During his tenure with South Africa, from 2005 to 2010, Arthur helped the Proteas achieve the top position in the MRF Tyres ICC Test Team Rankings, oversaw their victory over England in an away Test series for the first time in over four decades, and their maiden Test series victory in Australia, in 2008-09.

He was also at the helm when Pakistan lifted the ICC Champions Trophy for the first time, in 2017, and during the Sarfaraz Ahmed-led side’s streak of 10 consecutive T20I series wins as they ascended to the top spot in the rankings.

Arthur was removed from the role, following Pakistan’s extended poor run in international cricket, which continued into the ICC Men’s Cricket World Cup 2019. He had signed a short-team contract with Central Stags for New Zealand’s Super Smash T20 league in September, but was released from the role ahead of the impending appointment.

McDermott, who has earlier served as the South Australia Cricket Association’s high-performance coach, was first to come on board after he was recommended by Cricket Australia. Flower, the former Zimbabwe all-rounder, has worked with Arthur previously, as Pakistan’s batting coach, while Saker has worked as bowling coach for both England and Australia over the last ten years, before he took up the role of bowling coach with USA for a short period earlier this year.

Chandika Hathurusingha, the man whom Arthur will replace, remains under contract with the SLC. ICC

May 29, 2021 byRevatha No Comments
Five European Champions kicked off their celebrations