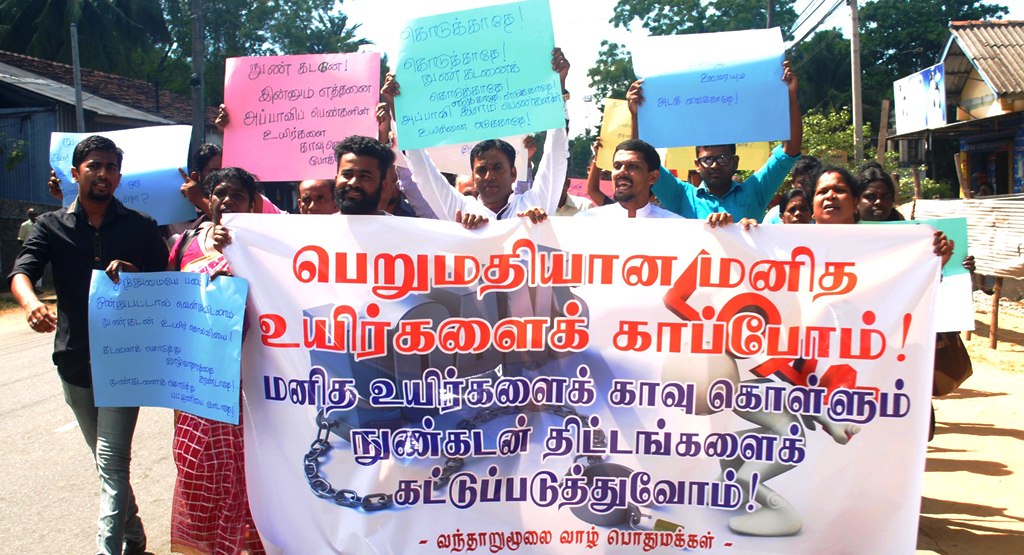 Thousands of innocent villagers, especially in the Northern, Eastern, and North Central Provinces are holding protests to raise a collective cry against the longstanding issues related to the microfinance debt trap that had claimed the lives of three women within the first three months of this year.

The three women who passed away by suicide are from Polonnaruwa, Vavuniya and Jaffna.

Protests that are convened, mostly by women, who are the major victims of microfinance debt trap, urge the Government to repeal their high-interest loans and to provide financial relief which was also one of the election pledges of the current administration.

However, the microfinance victims who have been terribly affected by the debt trap and are also overwhelmed with economic and social issues in mostly rural areas of the country, are still waiting for a sigh of relief.

On behalf of thousands of Sri Lankan women who have fallen into the vicious cycle of microfinance, the women in the North Central Province launched a satyagraha on International Women’s Day, demanding justice which was later joined by protesters in the Northern and Eastern Provinces. It is reported that debt-ridden women in the Eastern Province had staged protests in Kitula village in Batticaloa on Tuesday (30) in the Mullaitivu and Puthukudiyiruppu Town Centres. In addition, protests were organised by the Public Planning Forum at more than 15 locations, including Mannar.

The fast that began on International Women’s Day in front of the Royal Monument in Hingurakgoda, demanding the immediate abolition of microfinance loans, continues to this day, and the collection of women affected by microfinance loans says that more than 200 women have already passed away by suicide, as they could not bear the burden of debt.

As pointed out by the protesters, more than 2.4 million Sri Lankan women who are unable to repay their loans due to high interest rates, have been subjected to various forms of physical and mental abuse, including insults from finance companies and debt collectors.

The victims alleged that politicians continue to deceive the microfinance victims for their political aspirations and rob them of their votes to secure their victory.

They emphasised that the main reason for the microfinance crisis is the withdrawal of the Government from grassroots economic activity as well as poverty alleviation and transferring the responsibility to the profit-oriented financial sector. The protesters however urged the Government to intervene to solve the microfinance crisis immediately and write off the debts and to uplift their livelihood.

As described by the Central Bank of Sri Lanka (CBSL), microfinance is defined as “provision of financial services to low-income people” by the Consultative Group to Assist the Poor (CGAP). It brings credit, savings, and other essential financial services to people who are too poor to be served by regular banks, mainly because they are unable to offer sufficient collateral.

The Microfinance Act, No. 6 of 2016, which came into effect on 15 July 2016 provides for the licensing, regulation, and supervision of companies carrying on microfinance businesses, which are called licensed microfinance companies (LMFCs). The LMFCs would be directly regulated by the Monetary Board of the CBSL.

In Sri Lanka, there are about 15,000 microfinance institutions that are illegally operating in the country. However, only 54 companies have been registered with the Microfinance Association and only those who obtained loans from those companies enjoyed the benefits given by the Government on several occasions.

A women’s rights activist, Attorney-at-Law Radika Gunaratne, who represents many women across the country in courts, alleged that the CBSL’s inaction was the main reason for today’s situation of microfinance institutions, as it always ignored the issue, claiming that they did not have necessary powers to regulate the industry.

“If the CBSL doesn’t have powers, it should get the necessary powers and take action. It is the apex financial body in the country and it should control the financial institutions,” she stressed.

Even though the victims urged the Government to write off the loans, Gunaratne stressed that the suspending of loans would not help the victims or the rural economy unless there was a proper mechanism to monitor all institutions which practice microfinancing.

She said: “The issue with the microfinance loans is that the interest rates are much higher than the usual. Therefore, the victims need some kind of relief like rescheduling their loans by cutting down the interest.”

“A majority of these institutions are not registered with the CBSL or any government authority. As a result, they are playing in an open market which has no restrictions whatsoever,” she further noted.

Highlighting the suicides related to the microfinance issue, she said over 200 people have passed away by suicide as of now.

Accordingly, out of around 15,000 institutions lending money for poor women at a very high interest rate, only around 100 companies have been registered.

According to her, only two registered banks are giving away microfinance loans – the Regional Development Bank (RBD) and Hatton National Bank (HNB).

“We’ve been canvassing this illegality for several years but the authorities have failed to provide a concrete solution,” she continued.

Meanwhile, the State Minister of Samurdhi, Household Economy, Microfinance, Self-Employment, Business Development, and Underutilised State Resources Development Shehan Semasinghe said that writing off the loans obtained by these victims would not be the solution and the Government is not prepared to do so.

“There are a number of farmers who have obtained loans for productions. Setting off of microfinance loans will not be fair for them and therefore, we have introduced a system where people can get relief from their debt burden. We have already begun a new programme that will be a revolving fund working with the Samurdhi Bank. In the meantime, we are now in the process of giving them financial literacy,” he added.

According to the State Minister, a new loan scheme has been introduced to microfinance victims where they can obtain a loan up to Rs. 100,000 at a rate of 6% per annum to set off their high interest microfinance loans and this scheme is already in place in seven districts including Vavuniya, Mullaitivu, Batticaloa, Ampara, Kilinochchi, Jaffna, and Anuradhapura.

“I don’t know why people in Mullaitivu and Ampara joined the protest, because the system is there and they can speak directly to the Assistant Government Agent or Government Agent of the district and get the benefit,” Semasinghe stated.

Semasinghe also noted that the necessary laws would also be amended and the steps have already been taken together with the Attorney General’s (AG) Department.

“We are amending the laws. We want to have a regulation up to a certain extent. When we have a tough system, we pave the way for further unlawful people for unlawful money lending, while we are trying to control the organised companies and people who can be identified and are in the system,” he noted.

The State Minister also noted that a meeting would be held with the Secretaries to the President and the Prime Minister, Treasury officials, and CBSL officials to discuss further measures the Government can take to solve the issue.

“We have already established a mechanism and it will be further expanded in the near future to solve the issues faced by the victims,” he added.

November 27, 2021 byNews Admin No Comments
Sri Lanka’s urban development sector is set to improve within the next three years, The Sunday Morning learnt.