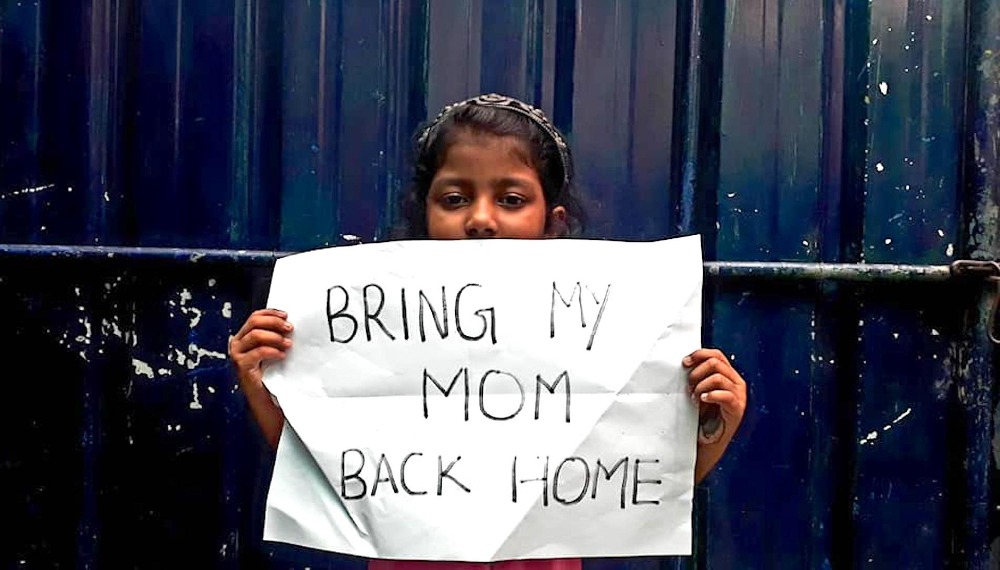 A significant percentage of the nation’s workforce are being forced from their homes, and away from their families to seek better economic opportunities elsewhere. Every year, over 100,000 women migrate for employment, and they primarily take on domestic work in the Middle East.

Amnesty International (AI) had recently revealed that at least 41 Sri Lankan women, the majority of whom are migrant domestic workers, have spent months on end, arbitrarily detained at a deportation centre in Saudi Arabia, awaiting repatriation.

The Sri Lanka Bureau of Foreign Employment (SLBFE) revealed that they hope to bring back Sri Lankan migrant workers stuck in detention camps as soon as possible.

SLBFE Deputy General Manager and Spokesperson Mangala Randeniya, speaking with The Sunday Morning, stated: “There are approximately 150 people detained in several detention camps across Saudi Arabia. Some have also been housed in welfare centres that are run by the Government of Saudi Arabia.”

“While most of these workers have not obtained an exit permit from their employers, some have been detained by the (Saudi) Police,” Randeniya said.

Revealing that all of them would be repatriated after Ramadan, Randeniya shared: “There was a delay in bringing them back because Saudi Airlines had not been operating. After discussions, the Saudi Government has agreed to provide Saudi Airlines to bring them back.”

Highlighting that all migrant workers stuck in detention centres across Saudi Arabia would be brought back after Ramadan, Randeniya said: “The landing rights would be given by the Government of Sri Lanka.”

Speaking with The Sunday Morning, State Minister of Regional Co-operation Tharaka Balasuriya said: “We are aware of the situation and our ambassador has been in contact with the Saudi Government. We are confident that we would be able to bring them back as soon as possible.”

While the contribution of migrant workers to the national economy is invaluable, migrant workers and migrant domestic workers are amongst the world’s most exploited groups. Migrant workers who leave their country to support themselves in the hopes of a better future are far more likely than other workers to experience work-related abuse, even death.

Shyama Jayanthi, 32, is a migrant domestic worker from Galle who had moved to Kuwait in the hopes of a better future for her and her family.

“I went to Kuwait as a home cook. The house I worked at did not treat me right and there were instances where I was physically assaulted. I ran away. I was in Kuwait for two years without a visa and once the authorities got a hold of me, I was taken to a detention centre, which had originally been a school.”

Shyama went on to say: “I did not have my passport with me, as it was with my employer. I tried to get in touch with the agency so that they could find me another place to work and told them that the situation at my current workplace was bad. The agency asked me to endure it for at least three more months and complete the six months, but I couldn’t endure it anymore.

“I went to the embassy multiple times too. When I got in touch with my agency, they asked me to pay them for me to be able to come back to Sri Lanka. My brother had to deposit Rs. 350,000 to the agency.

“I was in the detention centre for four months. We were treated like we were prisoners. There were even some women who had required medical attention, but we had to endure and make do with what little was given to us.

“They take you abroad, but after that, they do not care about what happens to you,” Shyama told The Sunday Morning.

Migrant workers are vulnerable to labour trafficking, the use of fraud or coercion to recruit, domestic servitude, forced labour, debt bondage, or other abusive situations. While Shyama’s story is only one of many similar stories, her plight had fallen on deaf ears. While it is undeniable that remittances of Sri Lankan migrant workers’ wages are an important source of foreign exchange for the stability of the country’s economy, the increasing exposure to mistreatment and abuse Sri Lankan women workers face in the Middle East is not something to be taken lightly.

More often than not, migration is a survival strategy pursued largely out of desperation for most Sri Lankan women who travel to the Middle East to find work as domestic helpers.

While Sri Lankan authorities must take proactive measures to ensure the immediate repatriation of the Sri Lankan women being stuck in detention centres across Saudi Arabia, so that they would be able to return home and reunite with their families, it is evident that the migration process is in dire need of newer and better regulation policies to ensure the safety and wellbeing of the migrant workforce of our country.

September 13, 2020 bySarah Hannan No Comments
The proposed move to have the Kurunegala Municipal Council cover the litigation costs of the case regarding the demolition of an archeologically important site in Kurunegala town has been put on hold