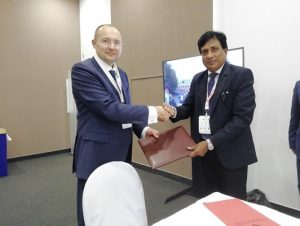 The Ministry of Defence(MoD) of Sri Lanka and the Ministry of Interior of the Russian Federation signed a corporation agreement yesterday.

‘INTERPOLITEX’ is one of the largest homeland security exhibitions in Europe.

Deputy Prime Minister of the Russian Federation Yuri Borisov addressing the event stated that exhibition is an important platform for establishing contacts between the manufacturers of special-purpose equipment from Russia and other countries and different law-enforcement agencies that are engaged in fighting crime, countering terrorism, and protecting national security.

May 9, 2021 byNews Admin No Comments
Despite diplomatic concerns raised, India is unlikely to receive the energy deal won by a Chinese company early this year to set up three hybrid renewable energy systems mixed with solar, wind, and ot

Administration of Sinopharm to Chinese nationals in SL begins today

April 5, 2021 byMihi Perera No Comments
Minister of State Prof. Channa Jayasumana says that the Covid vaccine received from China will be given to Chinese nationals in Sri Lanka from today (05).