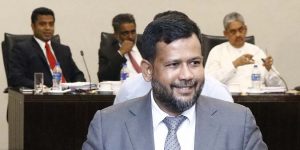 All Ceylon Makkal Congress(ACMC) today claimed that the new government is on a mission to sideline minority parties through proposed constitutional amendments.

“There is a need for a strong constitution, however the President’s intentions to amend the constitution are aimed at removing minority political parties. We vehemently disapprove this act,” Bathiudeen said.

The President highlighted that the Parliament was constantly subject to the influence of extremist parties.

Rajapaksa’s statement echoed the 21nd Amendment Draft Bill forwarded by former Justice Minister Wijeyadasa Rajapakshe which seeks to raise the bar of the percentage of electoral votes required for a political party, independent group or candidate to enter Parliament.

Wijeyadasa proposes that the current 5 % bar be raised to 12.5%.

The Janatha Vimukthi Peramuna (JVP) had also expressed its disapproval over the 21st Amendment Draft Bill and called on the government to clarify whether the draft bill was a reflection of the government’s stance.

November 1, 2020 byCharindra No Comments
The MEPA expert committee is to submit a quantification report to the AG over the anticipated civil liabilities that resulted from the oil spill.