August 26, 2020 by Dimithri Wijesinghe No Comments 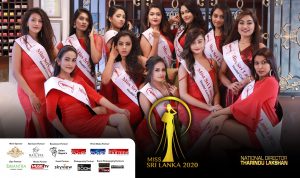 On 29 August, the Miss Sri Lanka 2020 competition organised by Sky View Productions will be holding the competition’s mini pageants at Grand Mondo Hotel.

The event’s preliminary audition rounds were held at the Cinnamon Grand Colombo in February 2020 and the 12 finalists selected will be participating in the mini pageants this month.

The grand finale is set to be in October this year and the winner of the grand finale will qualify for the Miss Asia Global pageant to be held in Malaysia.

The Miss Sri Lanka 2020 competition will be held under the direction of Tharindu Lakshan and will be hosted by him as well. Speaking about taking this on, he shared that, primarily, they chose to launch this initiative in answer to some of the scrutiny the Sri Lankan pageantry industry has been under over the past few years.

Tharindu shared that the pageant industry has been viewed in a negative light due to certain actions of directors and mistakes made by various persons involved behind the scenes; he said that their goal was to somewhat reinvent its name and give it a fresh new start.

He shared that what he and Sky View Productions set out to do was to shine a new light on the industry as a whole. He added that they hope to carry out an event which follows a certain standard that Sri Lanka can be proud of, a guaranteed quality assurance. They are hopeful that their tireless efforts are able to carry forth the pageantry industry to catch its second wind.

Speaking about the event, Tharindu said that their first attempt was last year, where they held the event’s first instalment of Miss Sri Lanka 2019, which was a massive success; they held their grand finale at Hotel Galadari with their main Chief Guest, former First Lady Shiranthi Rajapaksha. Last year’s winner went on to take part in the international pageant “Miss Tourism”, which was held in China.

The second and most recent instalment of the event is Miss Sri Lanka 2020, the preliminaries of which were held in February this year. However, Tharindu shared that due to the pandemic, their activities had to be brought to a halt, adding that they “hope to continue as planned now that things have somewhat been declared to be relatively safe”.

October 19, 2021 byNews Admin No Comments
I met Aunty Oosha when I was at Kelaniya University as an undergraduate. I was with the Oosha Garten of Ballet for nine years. Today, I am the founder, choreographer and artistic director of Sri Lanka

December 10, 2021 byNews Admin No Comments
It’s the most wonderful time of the year – Christmas! And with Christmas comes holidays. This year, with all the chaos and despair that came with the pandemic, since the country has opened up, it’s th