Music lasts forever, and so, when an artist dies, their work and its impact lives on. Kala Suri Alhaj Kareem Mohideen Baig, or simply Mohideen Baig as we know him, is no exception. 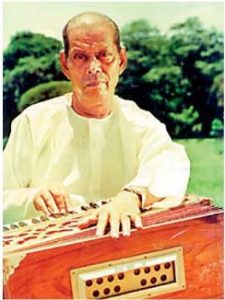 Armed with a deep and powerful voice, Master Baig, in his time, was one of Sri Lanka’s most sought-after artists. His humble personality, passion for music, and love for his nation carried him to great heights, making him an exemplary yet understated character.

4 November marked 30 years since Baig left us, and to mark three decades since his passing, we spoke to his son, Mohideen Ishaq Baig, on his father’s life, legacy, and the timeless classics we enjoy to date.

Finding his way to our shores

Born and bred in India as one of 12 siblings, Baig’s story begins against the backdrop of World War II, when his elder brother arrived as a soldier in Sri Lanka, and was sadly killed in active duty as a member of the Indian Armed Forces serving the war effort in Sri Lanka. His brother’s death was what brought Baig to our shores, and after burying his brother, Baig decided to follow in his footsteps and moved to Sri Lanka after his enrolment as an officer of the Armed Forces keeping with a promise made on his brother’s grave, much to his mother’s disapproval.

“He adored his brother. He visited the grave of his brother at the Kuppiyawatta Muslim Cemetery often, where he promised to keep serving this great nation. He was an Indian who left everything behind to come to Sri Lanka. His devotion and love for this country was so great that he served this nation till his last days, both as a soldier and a singer,” said Ishaq Baig. 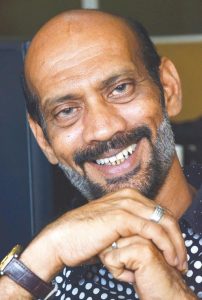 Ishaq also shared how Baig was known for possessing a humble personality amongst many other exceptional traits. “My father surprised many of his admirers with his modesty. People would often be misguided by the preconceived misconception that he was a frightening person, hence deterring many from approaching him. However, he was anything but a terrifying person and proved everyone wrong given the opportunity,” he added.

A doting father to eight children, who he raised amidst numerous challenges and hardships, Ishaq recalled how his father, a disciplinarian given his military background, strived to teach his children great life values. “Be a good human being, be patriotic, honest, humble, study well, be a philanthropist, and love the people of Sri Lanka regardless of their race or religion were some of the many qualities instilled in us by our father,” Ishaq said, adding: “He was a great man that many looked up to, including myself.”

The birth of a veritable virtuoso

Although singing was Baig’s forte, he never anticipated having a career in entertainment. Music was something he found solace in as a soldier. Bajau sessions were his most famous platform to display his vocals, where his talent was well-received amongst the locals.

Albert Perera – better known as Pandit W.D. Amaradeva – saw Baig’s potential and invited him to a casual sing-along, which became his first unofficial invitation to perform. “Despite Pandit Amaradeva being younger to him, Baig graciously accepted the invitation. Though he did not know a single word of Sinhala, he worked hard to learn it,” Ishaq revealed. “But it was his voice that attracted many a crowd to listen to him. It was a powerful and deep voice that could touch the heart of anyone.”

On being discovered for his unique voice, Baig then landed countless opportunities to sing for many movies produced at the time, and therefore opted to pursue a career in the entertainment industry after the war. The movie “Asokamala” in 1946, where he sang alongside Pandit Amaradeva, was the first movie to which he contributed, going on to sing melodies to most of the movies and other compositions produced in Sri Lanka at the time. “People bought tickets to watch movies with the pure motive of hearing my father’s voice,” Ishaq explained: “Many fans would be seen leaving the theatre if their wishes were not fulfilled. That was the impact he had created.”

Being non-buddhist and non-Sri Lankan by birth did nothing to stop Baig from capturing the hearts of incalculable fans from Sri Lanka, and eventually, he gathered fans from all around the world. Baig became a renowned singer of Sinhala as well as Buddhist devotional songs, and is acknowledged to have birthed a Buddhist song culture within the community. “He was a cultural singer and, in my opinion, one who built harmony amongst the diverse social groups in this country,” Ishaq said. 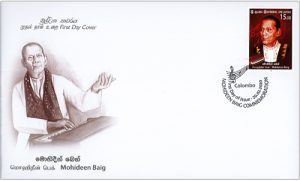 The commemorative stamp issued in 2020

Among several lifetime achievement awards for his contribution to the music industry and the culture of Sri Lanka, Baig was the first recipient of the Kala Suri Award that honoured his contribution to music and service to Sri Lanka. He went on to receive the award for two consecutive years in the mid 1980s. He further received the Sarasavi Award for “Best Singer” for his input in the movie “Allapu Gedara” in the mid 1960s, and former Prime Minister Sirimavo Bandaranaike also awarded Baig with the Deepashika Award for the highest number of songs sung.

“My father treasured those awards as much as he valued the love he received from the people of Sri Lanka. However, there was one other moment that he treasured more,” stated Ishaq Baig. “His visit to Mecca under the patronage of Muhammad Zia-ul-Haq, former President of Pakistan. My father had left an everlasting impression on the former President upon his visit to Sri Lanka by singing an Islamic song. Hence, he was given the opportunity to stay at the presidential house in Pakistan for 15 days before returning to the island. He was also offered a permanent residence in Pakistan, which he strongly refused, showcasing his patriotism towards Sri Lanka yet again.”

Though only a handful of songs of Master Baig are being heard at present, through remakes of various contemporary artists, he is known to have sung thousands of songs. His songs also include duets with both local and international iconic figures such as Latha Mangeshkar, Rukmani Devi, H.R. Jothipala, Pandit Amaradeva, Latha Walpola, Sujatha Attanayake, and many other performers.

The end of an era 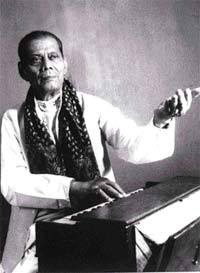 On 3 November 1991, Mohideen Baig was admitted to a private hospital in Colombo for cataract removal surgery, but unfortunately passed away the following day, reportedly of a complication related to the anaesthetics he was given. Keeping with Islamic traditions and the wishes of Baig himself, his funeral took place within hours of his death, and on his request, was buried close to where his older brother had been buried almost 50 years earlier.

Thousands of admirers of the late Master came to pay their last respects. “There was a sea of people at my father’s funeral and not even we were able to come closer to his coffin. There was not a dry eye in the room,” Ishaq recalled of the thousands of admirers who came to pay their respects. “Soldiers came to salute my father, fans were rushing to get a glimpse of his coffin and there was also an incident where a fan threatened to take her own life had she not been afforded an opportunity to see him. That was the love people bore for him.”

While our music preferences change over time, some of Baig’s timeless songs like Mal Sugande, Buddan Saranan Gachchami, Budunge Ama Darme, Tikiri Manike Ambula Genalla, Game Gode Sidadiye, and Anna Sudo never fails to tempt its listeners to sing along, testament to the power of Baig’s talent all these decades later.

On marking Baig’s 30th death day and the lack of events being held to celebrate Baig, Ishaq expressed his sorrow surrounding the lack of respect for the late Master. In 2020, while a commemorative stamp was issued in honour of his father, Ishaq shared the sentiment that “such a simple act cannot compensate for the contribution he has made”.

Ishaq also shared that while he initiated efforts in the past to celebrate Baig’s legacy, this year, his 30th death anniversary, will be very quiet. “In the past, I initiated efforts to hold concerts in his memory. But unfortunately, at present, we are all suffering due to the lack of shows and funds. It is incredibly difficult even for us as musicians to make ends meet at present given the pandemic. It is in the hands of the State to take the initiative to remember a man who has gone above and beyond to serve this country. A simple religious function will be held in his honour but nothing more. It is of great sadness to me that even his milestone anniversaries have been forgotten by everyone.”

Mohideen Baig advocated for the promotion of harmony amongst all religions and nationalities within the country, encouraging everyone to love beyond all flaws. He was reputed to be a simple and religious man who did not demand any recognition for his work. However, this should not be the driving force for failing to celebrate the life and legacy of this icon, while preserving his memory and work for many more generations to come.

November 9, 2020 byCharindra No Comments
ndependent health and fitness start-up Workout.lk hosted a webinar on 7 November to discuss natural ways to boost immunity in the times of a pandemic.

February 19, 2021 byNews Admin No Comments
Whenever someone is being over the top, it is customary for us to say: “සයිකො කේස් එකක් බං!” (S/he is a psycho case, dude!) right? This terminology could either be derived from the words “psychosis”..