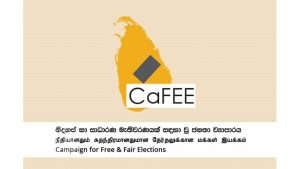 Several cases of election law violation have already been reported, just days after the 2019 presidential election was officially announced by the Election Commission, The Sunday Morning learnt.

Campaign for Free and Fair Elections (CaFFE) Executive Director Manas Makeen told The Sunday Morning they had received a number of complaints including two cases of misuse of state resources and abuse of power.

He said that in one instance, officials had been appointed to the State Timber Corporation. In addition, Samurdhi officials also had been newly appointed through political patronage.

However, no instances of election violence has been reported, Makeen said.

Meanwhile, the People’s Action for Free and Fair Elections (PAFFREL) said that they had also received reports of election law violations.

PAFFREL Executive Director Rohana Hettiarachchi said that there had been a reported instance of a state institution distributing agricultural equipment yesterday.

“A state institution had distributed some 450 manatees in Monaragala,” he said, adding that PAFFREL had notified the Election Commission of the violation.

In addition, Hettiarachchi said that vacancies at another state institution had been filled on Friday through political intervention.

“We were told that vacancies at the Water Board were filled on Friday. However, by the time we warned authorities of the misdeed, the appointments had already been made,” Hettiarachchi said.

He too noted that no cases of election violence had been reported.

January 6, 2019 bythemorninglk No Comments
The United National Front (UNF) is split on forming a National government and a final decision will be taken today.

Laws cannot be changed according to wishes of individuals: Defence Secretary

March 14, 2021 byLahiru Pothmulla No Comments
The laws of the country cannot be changed according to the wishes of individuals,  Defence Secretary Gen. Kamal Gunaratne (Retd) said today.