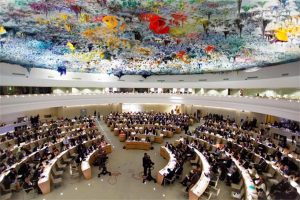 More countries have signed the cosponsorship form of the Resolution on Sri Lanka which was passed by the UN Human Rights Council (UNHRC) last month.

Additional cosponsors had time till last Friday to sign the Resolution titled “Promoting Reconciliation, Accountability, and Human Rights in Sri Lanka”, which was passed by the UNHRC at its just-concluded 40th session in Geneva.

The UNHRC Secretariat said that as of early Friday, 16 countries had signed as additional cosponsors.

March 25, 2020 byTSM Web Desk No Comments
Avant-Garde Chairman Nissanka Senadhipathi says he is willing to spend Rs 300 m from his personal wealth to bring down ventilation machines to the country.